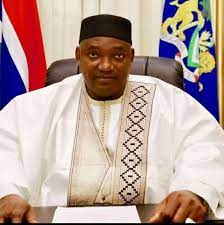 Indisputable sources within the National Assembly has hinted the Trumpet Newspaper that on the second day of Koriteh prayers, President Adama Barrow have dished out ‘Salibo’ to a group of National Assembly Members from various political parties and nominated members that were part of a clandestine visit at State House. The said meeting according to sources was organised by some NAMS to show support to Barrow. Sources added that President Barrow gave them Salibo in CFA denomination.

According to our sources, on Wednesday 4th June, 4 National Assembly members from National Reconciliation Party (NRP), 3 from Gambia Democratic Congress (GDC), 1 APRC, 11 from United Democratic Party (UDP), nominated members Majanko Samusa and Foday Gassama were hosted by President Barrow at a reception at State House. The said reception was done in a friendly atmosphere amid laughter and teasing from the President. The delegation was said to be led by Minority leader and member for Niamina Dankunku Samba Jallow.

Sources added that the President was very jovial and asked NAMS about their political affiliation as far as he is the president. At the end of the visit, President Barrow was alleged to have given them a huge amount of money in CFA. The amount when converted to the Gambian currency could be estimated to about D6, 500 for each. Almost all the NAMS in attendance promised President Barrow of their support even though, they belong to another political party. The reception was said to have lasted about 4 hours.

However, Minority leader Jallow and nominated member Samusa could not be reached for comments.