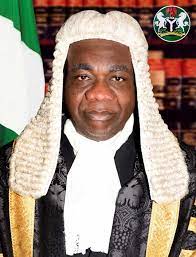 Appearing before the Truth, Reconciliation and Reparations Commission (TRRC), on Monday 24th May 2021, Justice Nkea said “Agim de-motivated me…, and instigated my dismissal.” “This is a very serious allegation,” lead counsel Essa Faal put it to the witness. “Yes I will say so even in my grave,” Justice Nkea maintained.

Emannuel Agim is a Nagerian national who had served as Director of Public Prosecution (DPP) Judge and eventually Chief Justice of the Gambia.

Agim has been mentioned by witnesses who appeared before the TRRC as one of those people who were doing Jammeh’s bidding at the judiciary.

Nigerian judges who had served the Gambia under Jammeh’s regime have been accused of violating the right of Gambians who appeared before them in court. Most Nigerian judges were referred to as “mercenary judges.”

Few years ago, Agim granted an interviewed to the media defending the work of Nigerian judges in The Gambia. He said it was not the Nigerian who were arresting and bringing people to court. Agim said it was the police, NIAs who were responsible for arresting people and they are all Gambians.