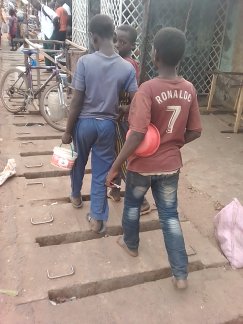 One would have thought that the issue of Children Street beggars known as ‘Almudous’ is a thing of the past in The Gambia. Well that could be the case in urban Gambia, but traveling through the North Bank booming town of Farafenni, ‘Almudous’ could be seen all over the commercial town running from commercial and private vehicles to another that stops in the town. These children dressed in rough and untidy clothes do wake up very early in the morning begging alms and food from travellers.
Between 2007 and 2008, the government of The Gambia has done tremendous efforts to curb the massive overflow of children beggars entering in The Gambia in name of ‘Almudous.’
Hundreds of ‘Almudous’ including their guarding marabous (Quranic teachers) were rounded up by the officers of the Immigration Department and sent back to their respective homes. Most of these religious teachers and students were non-Gambians.
Farafenni is a booming border town not far from the Senegalese town of Kaolack, thus, making it easier for these ‘Almudous’ children to cross over into The Gambia.
Engaging the children, this reporter found out that none of them are Gambians neither were they born in Farafenni. Some entered into the borders from Senegal to find a better living or escaped the wrath of their cruel quranic teachers. Unhappiness, fear, drowsiness, mix with hunger could be manifested all over their faces. Though as children, at times they tend to forget their predicaments by chasing each other around the busy commercial area of Farafenni just to pass time for the day.
In the afternoon towards the evening, they will find a shade or anywhere cool to get a nap in order to be strong for their evening routing. One can find them at abandoned garages or sleeping under the trucks that are not yet ready for a trip. Shortly before the night falls as the town shops are busy closing for the day, they will disappear and never to be seen again until early morning the following day.
Mr. Lamin Fatty of the Child Protection Alliance (CPA), confirmed the presence of street children in rural Gambia whom his office referred to as ‘Children on the Move’. Fatty indicated that CPA is aware of children on the move in Farafenni, Basse, Jarra Soma and Bansang respectively. He attributed the overflowed of these children in Gambian rural towns due to their proximity to the Senegalese border towns and villages which have lots of traditional local quranic centres.
He indicated that his office and UNICEF are working together to implement a program on how to get these children off the streets of rural Gambia.

He lamented the difficulties of sheltering homeless children as The Gambia has only one sanctuary for children. He added that they should first shelter the children before parental identification and possible repatriation can be done.
Mr. Fatty calls on the government to brace itself in combating the children on the move and should be ready to enforce the law for the safety and protection of these children off the streets. He decried the financial capability of his institution to combat the menace of ‘Almudous’ within The Gambia. CPA according to him is ready to engage the government and the Ministries concern to combat the children on the move from the streets.