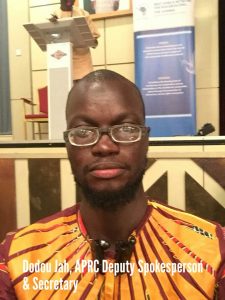 Dodou Jah a member of the former APRC ruling party of Yahy Jammeh has called for the punishment of any soldier who is found wanting by the Truth, Reconciliation  and Repatriation Commission(TRRC). Jah made this remark on King FM a local radio station on Friday 26 July 2019.

The APRC loyalist said if the commission is to be taken serious; all those soldiers who were involved in killing innocent Gambia should face the full force of the law. He said there are people who were mentioned by some of the witnesses but are still active members of the Gambian National Army. Jah said looking at the line of questioning of witnesses by lead counsel Faal one could see that the counsel is all out to incriminate Yahya Jammeh.

Dodou Jah said if the commission happens to allow all those mentioned to go free then there was no need of setting of the commission. He said crime is crime it does not matter who has committed it. ‘You could see some of the witnesses were smiling when they appeared before the commission,’ Jah said. He accused counsel Faal of compelling witnesses to admit that it was Yahya Jammeh the former President who ordered the killing of the victims.

It could be recalled that from the beginning of this week about three members of Jammeh.s hit squad known as junglers have appeared before the commission to testify. Malick Jatta, Omar A Jallow and Amadou Badgie all have confessed of participating in killing innocent Gambians and also over 50 foreign nationals majority of them Ghanaians.

Jah also accused the Barrow government of neglecting of important government institutions like agriculture and education. He said the privatization of Gambia Collage is bad idea.  He said during the APRC regime no Gambian students paid any money to go to Gambia collage. He said the Barrow administration is concentrating on issues that have little or no national interest at all.