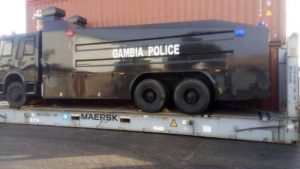 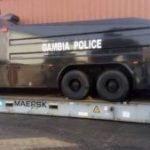 It is indeed very worrying that given the history and experience of the Gambia in terms of freedom of assembly that the Gambia Government could not think of anything better other than importing an armored riot vehicle. It appears this Government has not learnt from that despicable history or merely wishes to perpetuate the denial or suppression of the right of citizens to demonstrate peacefully. Is this armed vehicle meant to protect and expand rights or is it intended to suppress the right to freedom of assembly?

The argument that the police is poorly equipped to manage demonstrations hence such a vehicle will prevent the deadly shootings is a weak argument. This argument seeks to criminalize protests and protesters as violent hence seeks to deny the right to freedom of assembly. Secondly it is not backed by evidence because protests get violent in the Gambia primarily because of the belligerent approach of the security forces. Almost any time Gambians assemble to demonstrate the response of the police has always been to kick, slap and insult Gambians leading to shedding of blood and tears.

Therefore, the primary challenge the police face in managing protests is not a lack of tools and resources, rather it is, first and foremost, their limited understanding and appreciation of human rights. The solution then should be to provide human rights education and orientation to the police which speaks to the broader issue of security sector reform.  Furthermore, it is about providing the necessary knowledge and skills to the police about how to manage demonstrations. This is what one would have expected any responsible government to do given our history and experience and not to further arm the police.

When you read the 2016 Manifesto of Candidate Adama Barrow and his Coalition it would appear this was the understanding they had and planned to do when they assumed power. In the Manifesto they promised to conduct legal, institutional and constitutional reforms so as to enhance democracy, popular participation and human rights in the Gambia. They mentioned a number of laws, constitutional provisions and security institutions that would require reform for that purpose.

Yet after two years in power this Government has failed to review the Police Act, The NIA Act or the Public Order Act among others in order to ensure that these institutions and laws protect and expand the rights of Gambians. Thus, without these legal and institutional reforms it means our security services remain with the same mentality and practice since colonial days which is founded on the objective of suppressing the citizen.

What this reality exposes is that in the first place the civilian authorities from the President to the Minister to the Directors and Managers who make the decisions are themselves not either aware of or do not care about human rights. Consequently, they could allow our security forces to use violence to harm Gambians and still go ahead to protect those perpetrators. We saw this in 2001 when the Indemnity Act was amended after the 2000 student massacre. We saw again how Barrow nearly ‘forgave’ PIU officers charged for shooting citizens in Faraba 18 years later in 2018!

It appears therefore our civilian officials as well as security officers are not committed to system change which is why they leave things as they found them. For example, it is clear that the Public Order Act is undemocratic according to Candidate Barrow and his Coalition leaders because they stated it themselves in their 2016 Manifesto. Yet they refused to change it since taking power in 2017 up to today. Similarly, the Police Act states under Police Rules Section 20(a) that PIU officers will be issued with AK47 and pistols as basic tools in the execution of their duties.

Consequently, if you issue such weapons to men and women in uniform who also do not understand and appreciate human rights especially the right to freedom of assembly then the tendency for them to release bullets on citizens will be high. There would not have been any deaths in the Year 2000 or in Faraba in June 2018 if the Police Act and the Gambia Police Force itself were reformed. But why did the Barrow Government refuse to reform these laws and institutions until now?

It is precisely for this reason that it is such a very bad idea to import an armored riot vehicle. It means our Government is refusing to realize the best interest of this country by making the necessary reforms in order to bring about system change. That failure means they are only interested in securing their positions and power. With this armored vehicle it means from now on the Police will be using it to bazooka citizens with hot or cold water or pepper spray or any chemical they choose to load in the vehicle.

It is no exaggeration to say that the importation of this vehicle is directly linked to the security of Barrow’s presidency because he knows that there will be citizens who will demand that he abides by his own promise to step down in three years. Since he is not interested to fulfill his own promise by resigning after three years therefore, he is ready to use any force necessary to suppress dissent.

This vehicle therefore highlights once more that once again Gambia is led by elected and appointed officials who are not interested in the common good of the country but only concerned and interested in their own personal objectives. This must not be acceptable to any Gambian and I urge citizens to condemn the importation of this vehicle of shame!