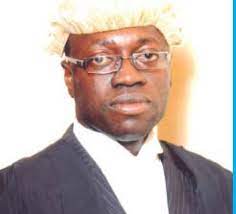 Defence Counsel Badou S.M. Conteh of Lord’s Chambers, one of the lawyers that defended the former two young managers of the Gam Petroleum, Mr. Saihou Drammeh and Lamin Gassama and won the case against the eight criminal charges says their victory was a result of good team work, dedication, sincerity to their profession and cause for justice to prevail. Barrister Conteh also commended the Justice system for not only delivering Justice but making sure justice is seen to be done.

Talking to Trumpet Newspaper shortly after the Court delivered the decisive ruling on the no case submission, at his office along Bertil Harding Highway at Senegambia, Barrister Conteh was quick to honour and dedicate their victory to the most senior counsel of the team lawyer Christopher E. Mene, whom he described as a credible person so committed to delivery of justice at all cost. “He keeps us on our toes by giving us so much research concerning the case. He was always there at the front and made sure we did what we were supposed to do. I really appreciate working with him and without him the work would have been very difficult”, says Conteh.

On the issue of whether the State can appeal against the verdict of the ruling, lawyer Conteh indicated that appeal is a right but said there is no room for any appeal to succeed in this case. He said the trial Judge Haddy Roche is a known lady of Justice since her early days to date and always delivered justice with hard facts thus leaving no room for any appeal to succeed against her judgment.

Counsel Conteh however, stated that the case was not an easy ride, though they won based on true team work, trust and confidence the accused person had for the team. He indicated that it is not easy to deal with all the eight charges against their clients and said it was a tough nut trial on both sides. “Dealing with evidence of twelve witnesses especially under cross examination is not an easy task and the charges against our clients were so serious it keeps us all awake to make sure we did a proper defending”, said Badou.

He concluded by thanking their team senior counsel Mene, Pauline Barkurin and the clerks saying he did learn a lot from working with Counsel Mene.