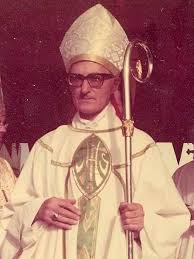 BELOW IS A STATEMENT FROM GAMBIA PASTORAL INSTITUTE FACEBOOK PAGE

Bishop emeritus Michael Joseph Cleary was born in county Mayo, Ireland, on the 1st September 1925. He was the youngest of the four children, with an elder brother and two sisters. Eight days after his birth, his mother died, and four years later, his father died too. His father left two plot of land, one to each son. Bishop Cleary’s nephew now owns and farms the land that he inherited. Bishop Cleary was brought up separately from his brother and two sisters. He formed a great attachment to his devout grandmother. Bishop Cleary make his decision to come Africa when he visited his secondary school of a Holy Ghost Father who showed a film made in missionary Africa. He decided: ‘That’s where I want to go.

Bishop Cleary’s late sisters both entered religious orders. One was Dominican in South Africa, and the other a contemplative sister in England and Ireland. His late brother followed in his father’s footstep as a farmer.

Cleary entered the novitiate of the Holy Ghost father (now commonly known as the Spiritans) in 1943, and then studied for an arts degree at the university college of Dublin, Ireland. He spent two years practice-teaching at Blackrock College, the boys’ school in Dublin run by the Holy Ghost fathers. He was ordained priest on 29th of June 1952 at the age of 26 by Dr. John Charles McQuaid, archbishop of Dublin.

With an early desire to work in Africa as a missionary, young father Cleary was posted to the Gambia. The country was not considered an exciting place to serve as a missionary at that time. Holy Ghost fathers working in Eastern Nigeria and East Africa could boast of huge and growing congregations, whereas the Gambia was a Muslim country with only a few Christian, and a catholic population of around 3,000. On the 29th of October 1953 a year and four months after his ordination, young Fr. Cleary arrive in the Gambia by sea, he fancied being sent to a missionary outpost such as Fulabantang and Basse, but his superior the late bishop Michael Moloney, decreed that he should teach at saint Augustine’s high school, then in Hagan street (Daniel Goddard street) Banjul. St. Augustine at that time was staffed by Irish priests, local staff, and British volunteers. Bishop Cleary taught mathematics and history. He went on to spend 25 years at the school, 17 of those years as principal.

Despite wanting to work as a parish priest in the rural and remotes part of the country like his superior and predecessor the late bishop Moloney and other Irish missionaries, it was different with  bishop Cleary, he spend most of his priestly years as a teacher and principal of saint Augustine high school.

In those days the school year ran from January to November, and during the long school holiday Bishop Cleary would replace an up-river priest who was on leave; for example at Basse where rural night sounds unknown in Banjul caused him some unease.

January 24th 1981 bishop emeritus Michael Joseph Cleary was appointed by the Holy See to be the replacement of bishop Moloney who set down due to ill health on the 4th of April 1980. He was consecrated bishop on Sunday the 24th of March 1980 at the age of 55 and was enthroned at the cathedral of our lady of the assumption in Banjul the following Sunday the 31th march 1980. Due to the health condition of his predecessor bishop Moloney, Archbishop Johannes Dyba was the principal consecrator and his Bishop Moloney act has co-principal consecrator together with Archbishop Joseph Henry Ganda, Archbishop of Freetown and Bo.

From the 23rd-24th of February 1992, bishop Cleary hosted his holiness the late Pope John Paul II (now Saint John Paul II) when he came to the Gambia.

On the 15th of February 2006 Bishop Cleary tender his resignation letter to the Holy See, at the age of 80. February 25th 2006 it was announced in the Vatican that the resignation request of bishop Cleary had been accepted, and Bishop Ellison would be his successor. Bishop Cleary stayed for 9 nine years in the country after his retirement before leaving for good. He wanted to go quietly, but on Friday March 13th 2015 in a typically simply fashion a thanksgiving mass was held in his honor at Saint Therese parish church in Kanifing. Before the final blessing, Bishop Cleary addressed the congregation, in these words, perhaps I am too emotional, but I have always dreaded parting from friends and saying goodbye…

Sixty-two years ago I came to the Gambia, and it is here I spent all my priestly life. Later as bishop, I travelled throughout the country and got to know well, and love its people. Otherwise, I would not have stayed. I made many friends here, both Muslims and Christians. Now, in my 90th year, I feel I should live nearer hospital and nursing care and not be a burden here. So I wish to sincerely thank you for the best years of my life. I now ask the Almighty to guide and protect you and your friends and families. You will always be in my thought and prayers. God love and bless you all.

The following day Saturday March 14th 2015 Bishop Cleary finally left the soil of the Gambia to his home country of Ireland to the Holy Ghost Fathers’ home in Kimmage Manor after 62 years of unprecedented work in the catholic diocese of Banjul both as a priest and bishop.

The departure of Bishop Cleary may be regarded as a milestone in a long period of expansion of the Catholic Church in the Gambia. When he first arrive the small catholic mission- not then a diocese was run by Irish missionaries. Now, at the time of his departure 62 years later, the much more numerous Gambian faithful are led by Gambian priests and the laity are more than over engaged in the running of the church: developments that bishop Cleary always prayed for and helped to foster.

During his 25years as bishop of the catholic diocese of Banjul bishop Cleary ordained 17 Gambian priests 15 diocesan priests and two Holy Ghost fathers and blessed and consecrated my churches and schools Bishop emeritus Michael Joseph Cleary spent 62 years in the diocese of Banjul from the 29th of October 1953 to the 14th of March 2015, 28years as a priest, 25years as bishop, so far the longest serving bishop of our diocese, and 9 years after retirement.

He died on Wednesday 3rd September 2020. May his soul and the souls of all the faithful departed through the mercy of God rest in peace. AMEN