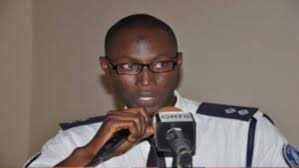 The Gambia Police Force (GPF) has decided to remain tight-lipped and does not even want to entertain any Journalist regarding  the Sunday, 26 January 2020 fracas between the ‘3 years Jotna’ pressure group and Police apparatus deployed at the scene.

The Police Public Relations Officer (PRO), Assistant Superintendent of Police (ASP), Lamin Njie, on Tuesday 28th January ignored several phone calls from Trumpet Newspaper for a possible interview on the current political crisis which involves the Police. Several phone calls were made to him but he appeared to be deliberately ignoring our calls.

Visiting his office from 13:00hrs to 14:00hrs, ASP Njie was found by the reporter at the first floor balcony of the Police Headquarters constantly talking on phone.

The Police mouth-piece ignored the reporter while busy talking on phone for over 25 Minutes, and later walked along the corridors to the back balcony of the first floor.

After a while, he was seen walking back into his office still on the phone talking. Moments later, the reporter followed him and knocked his office door but no response.

After a while, he sent a junior Police Press officer to ask the reporter to wait for him.

After another twenty five minutes, the said junior Press Officer, who identifies himself as Amadou Marong, re-emerged to inform the Trumpet reporter that the PRO couldn’t grant him audience for an interview.

Press Officer Marong said, “I’m sorry sir, but the PRO said he has no comments on the subject matter and will not talk to any journalist about the incident.”  The reporter asked, ‘But I did not brief the PRO about my mission; how can he come to conclusion I am here for the Sunday incident?’

Officer Marong replied, “Sorry sir, but this is what he asked me to tell you.” The reporter asked, ‘So he will not even see me in person or open his doors to me, to inform me in person?’ Marong again, “No, he said no comments and cannot see you.”

The Trumpet Newspaper has started its investigation into the Sunday incident in which several protesters were injured and taken into custody when Police attacked unarmed protesters with tear gas and batons to disperse them.

Our team is gathering pieces and dots together about what must have triggered the chaos and pandemonium during what was supposed to be a peaceful protest, after a permit was granted.