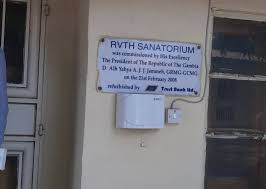 Trumpet newspaper has been spreading its investigative tentacles into the inside of the Gambia’s Covid-19 “Treatment Centre” at the Edward Farncis Small Teaching Hospital’s Sanatorium located at Mile II in Banjul, to unveil the circumstances surrounding the treatment procedures being administered by the doctors and nurses on the Covid patients that were sent there for treatment.

So far, several people who were said to have tested positive of Covid-19, were taken to the treatment centre at the Sanatorium, commonly known as ‘wenchung’, for treatment procedures, and had been discharged. The country, according to health authorities, has registered 26 total confirmed cases; 21 recoveries and 1 death (a Bangladesh).

The several cases of “recoveries” gave rise to doubts in some quarters as to what types of medicines and treatment methods are being used to have patients in the Gambia recovered from this deadly virus that has already killed a large number of people, globally; especially at a time when the whole World lacks scientifically proven cure for the virus.

It’s worth mentioning that the East African nation, Madagascar, has claimed to have discovered a herbal cure for Covid-19, and some African nations, among them Senegal and The Gambia, have already received the “Madagascar Covid-Organic (CVO) herbal medicine”, albeit WHO and other international health experts have cautioned against “unproven treatment” for this common enemy Number one.

At some point, these patients, as they claimed, did serve as their “own nurses” by checking their own blood pressure and temperature and then passed on the information to the nurses that were supposed to attend to them, medically.

However, our Journalistic investigation reveals that none of the patients was ever put on any testing machine; neither a ventilator nor any medical equipment received from donors for Covid-19 treatment was ever administered on them.

The only form of treatment they received was a yellow tablet that looks like ‘coartem’ and was given to them at least, twice during their stay at the sanatorium.

Most of the patients confirmed they refused to consume the drugs as they were disappointed with the issue of their treatment and methods used by the doctors and nurses there.

They chided it a “hoax and false treatment centre” where no treatment is done but instead, only temperature measurement, which was purportedly done by the patients themselves.

Some of them even alleged that at times nurses refused to attend to them by claiming that they were working at the frontline for months without any payment and no adequate gadgets to protect themselves from the virus.

“How can Coronavirus patients sweep their own rooms up to the veranda and do all kinds of household chores by themselves. None of us felt sick and we do not consider ourselves as patients, but instead a prisoner under house detention.

“None of us ever complained of any headache, common cold or any suspicious sickness which have links with Coronavirus”, they claimed.

There was also an unconfirmed report of lab technicians withholding test results to prolong suspected patients stay at the centre, in order to justify their treatment; but that “deep in their hearts” they knew none of those persons was infected with the deadly disease.

The lab technicians, our informants further alleged, also complained about pay, and they sometimes used lack of electricity as an excuse to withhold the lab results.

On several occasions, the nurses or medical attendants would never show up; they  instead call and instruct patients to send measurements of their temperature to the nurses. While some had refused to cooperate, others who couldn’t do it were assisted by their fellow patients.

On most occasions, the said patient who was very active would purportedly make the round from patient to patient to measure their temperature and pass on the details to the nurses via phone call.

A concerned discharged patient described it as “very disappointing and heartbreaking” for nurses and doctors to ask patients to check themselves and pass on the results via phone call to them.

From our interviews, all the patients have serious reservations about the way and manner they had been handled and kept at ‘Wenchung’.

Our interviewees argued that were expecting treatment but all they had seen and gone through was “eat, drink and sleep” like any other healthy person.

Trumpet newspaper contacted Dr. Abubacarr Jagne, Head of the Coronavirus Treatment Centre, to get the other  side of the story. The medical practitioner explained some of the patients came with other sicknesses that have symptoms of the virus and they were given antibiotic and antihistamine tablets to control their sickness from spreading into a deadly Coronavirus.

Dr. Jagne referred to Coronavirus as a common cold or flu of its own, different from the normal common cold flu in the Gambia. He added that, one is deadly while the common one in the Gambia is not.

The Gambia’s Coronavirus “Treatment Centre” chief indicated that the severity of the Covid also depends on the age and other [underlying] diseases, like diabetes, hypertension, asthma, cancer and HIV tendencies.

He stated that any patients found with a small element of such diseases are usually taken to the treatment centre and a particular antibiotic and antihistamine treatment would be given to them.

Dr. Jagne also said those found with moderate symptoms of the virus are given antibiotic to control their immune system from aggravating into the deadly type of the virus, thus the reason why they keep patients at the treatment centre to prevent them from spreading the virus.

The head of the Centre concluded that so far, no patient was ever put on a ventilator or administered on treatment similar to that of the Western world due to the severity and nature of the virus.