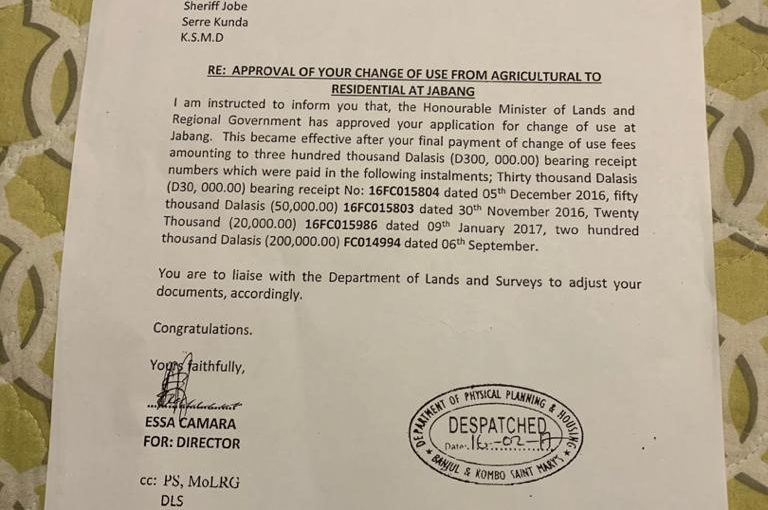 Credible information gathered by Trumpet newspaper about the outcome of the advisory findings into the land dispute between Jobe Kunda of Serrekunda and Jatta Kunda clan of Busumbala revealed that 410 plots of land were illegally sold by Jobe Kunda outside their leasehold with approval and clearance from Department of Lands and Survey, and Physical Planning. The findings also found that Jatta Kunda clan sold 32 plots of land which are within the 30 percent leasehold of Jobe Kunda, out of which only 4 plots were approved by land authorities.

This new development arises when the Ministry of Local Governments and Lands headed by Permanent Secretary Buba Sanyang and Deputy Permanent secretary Technical Musa Badjie, involved an independent professional land surveyor Mr. Momodou Gaye of Cityscape to identify and demarcate the said land in dispute according to the lease agreement.

After the survey by Mr. Gaye, the permanent Secretaries including senior staff of physical planning and lands departments with the warring parties went to the scene to identify the boundaries of the lease land by Jobe kunda.

It was discovered that the thirty percent land allocated to Jobe Kunda was over extended and encroached on all sides of Jatta Kunda farm land at Tawto-Jabang. The lands were sold to people randomly with approvals and clearance issued to Jobe Kunda and their clients by lands and survey and physical planning to have legal ownership of the plots and approval to construct structures there.

There were compounds built on those illegally acquired lands worth hundreds of millions of Dalasi. Some construct 1,2,3,4 storey buildings and expensive houses on their illegally acquired plots from Jobe Kunda with the approvals and clearance by the Lands and survey and Physical Planning.

The said land dispute centred on new residential towns like Tawto-Daru-Jabang all within the Busumbala Jatta Kunda farmlands. There was a clashed between Jobe Kunda and some residents of the area over the legality of ownership of their compounds and plots. Lots of properties were demolished by Jobe Kunda believe to worth D18 Million. That clashed prompted the Police to intervene and permanently stationed officers at the site to stop any party from further development until the outcome of the investigation into the matter.

Trumpet tried in vain to have an interview with Mr. Kebba Ceesay the Director of Lands and Survey and Mr. Manjang Director of Physically Planning.

Mr. Ceesay decline and interview and directed the reporter to write a formal letter to Permanent Secretary of Ministry of Local Government and Lands. He added that most of the lands cases are now been sorted out by the Ministry itself and not his department.

However, the DPS Technical Musa Badjie has vowed not to grant interview with Trumpet Newspaper concerning Busumbala Jatta Kunda and Jobe Kunda of Serrekunda for reason due to our previous publication concerning the matter.

The Physical Director, Mr. Manjang said his office is only mandated for planning and demolition of structures and that he has no hand in the Jobe Kunda and Jatta Kunda land case. When told that his office was involved in demolishing structures in Tawto- Jabang, he said the reporter should write a formal specific letter to his PS before he can comment on that issue.