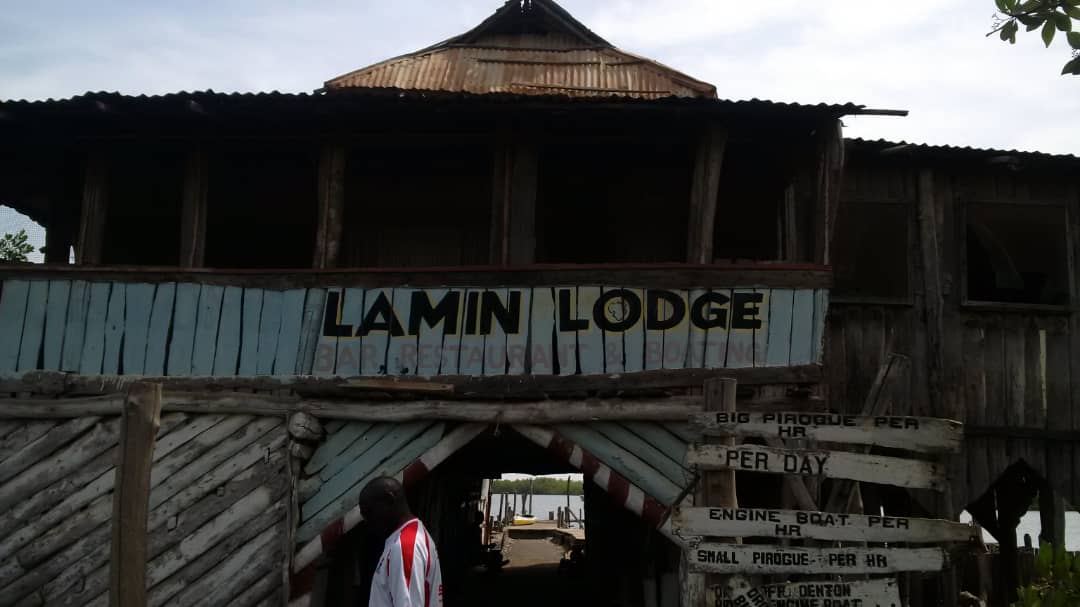 By: Lamin Njie
All seems not going well between the current management of the only river lodge in Lamin village (Lamin Lodge) and the newly constituted Village Development Committee (VDC). The Kombo North community is lamenting about the dilapidated condition of one of the most famous and visited lodges in the Gambia within the tourism industry. The community also felt insulted as to the manner and way the current management is operating the only tourist attractive place in their village.
In a press conference held at the lodge on Saturday 14th March 2020, Jammeh Bojang, Chairman of the Village Development Committee expressed his committee’s frustrations over the lack of progress in trying to reclaim back the lodge from its current proprietress, Ms. Anna Sidibeh.
According to Mr. Bojang, his committee is reclaiming back the properties and assets that belongs to the people of Lamin Village and that the process has been going on for a while. “We have written and informed all our stakeholders including the local authorities and the political authorities of our intention of bringing together everything under the control of the new VDC,” he said.
“This Lamin Lodge here was created by the committee of the village and an agreement was entered with The Gambia River Excursions and a Memorandum of Understanding (MoU) was signed with Peter Loosen who was then operating the lodge. But after the expiration of the first (MoU) with Peter Loosen, the committee is not gaining any benefits from this lodge’’, he added.
Jammeh Bojang further added that the whereabouts of The Gambia River Excursions is not known as at the moment and the current management of the Lamin Lodge under the leadership of Anna Sidibeh is not showing any signs of letting the lodge back to the committee.
“We have invited her for meetings on several occasions but she was not responsive. The last time we call her about meeting with the VDC at the lodge, she refused to attend and instead said we meet with her at a particular restaurant along Kairaba Avenue’’, said Jammeh Bojang. Mr. Bojang described the action of Ms. Sidibeh as an insult to the community of Lamin and the VDC.
Chairman Jammeh further stated that they will never relent till they reclaim the lodge back to the Villagers. “This might be our last action and anyone with a business entity here should know that Bereto – Tenda, housing the lodge is own by the community of Lamin and they can take it back anytime they wanted. We have documents to that effects from the former Alkalo,” he concluded.
Yusupha Gomez, the Secretary General of the committee stressed that in the past the community used to have royalties from the past management of the lodge, which is no longer the case. “We are a village that needs a lots of development but without resources such developments is not possible,” he said.
Similar sentiments were expressed by Kebba Kinteh, adviser to the Chairman and Buba Drammeh President of the stakeholders of Lamin Lodge.