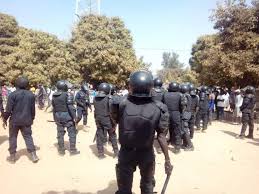 Reliable information reaching Trumpet Newspaper, from credible eye-witnesses and affected persons from Central Baddibou village of Kerr Pateh (Pateh Korreh), have it that, early Wednesday morning of 18 March 2020, members of the Police Intervention Unit (PIU) stationed at the Village forcefully ordered merchants and businesses out of the Village’s weekly market popularly called Lumo.
The PIU, according to the sources also locked down all roads leading to the village, thus denying vehicles, motor bikers, bikers and pedestrians from accessing the village’s weekly market. The Village’s northern frontier with Senegal was also locked down.
Dependable witnesses informed this medium that, the Police said they were acting on orders to shut down the ‘Lumo’ in order to curb COVID-19 (Corona virus).
Kerr Pateh is a village sharing border with Senegal and has been famous for its ‘Lumo’ for decades, attracting business and merchants from all over the country and Senegal.
According to eye witnesses, sellers and buyers that swamped into the village for the weekly market were taken by surprise when out of the blue Police officers angrily ordered people to close their stalls and immediately vacate the village.
The Police, according to witnesses, said they have orders to shut down all local markets and not to allow non- residents of the village to neither enter nor gather anywhere near the said Village, so as to avoid attracting Corona virus (COVID-19).
Eye-witnesses also confirmed that Police were manning the border with Senegal and not allowing commercial vehicles into the Gambia.
Dozens of commercial vehicles from Farafenni, Barra and other major towns and villages were also barred from entering the village. Even traveling passengers going on their normal journeys were not allowed in the Village, Trumpet gathered.
However, the affected persons and merchants lamented their frustration about the action of the authorities to lock down their weekly markets when all daily markets across the country are being allowed to operate freely without hindrance. They questioned the fairness of the authorities for not banning daily markets in urban towns but can deny poor struggling villagers to access their markets where they get their daily incomes from.
“Today, many families will not get their daily foods as some depend on this weekly ‘Lumo’ to make ends meet for their families,” said an angry businessman. The weekly ‘Lumo’ also serves as an opportunity for many families to buy all their weekly food stuffs and condiments for their weekly consumption.
The Spokesperson of the Gambia Police Force ASP Lamin Njie could not be reached for comments. Before going to press barrages of calls were made to him but did not picked our calls.