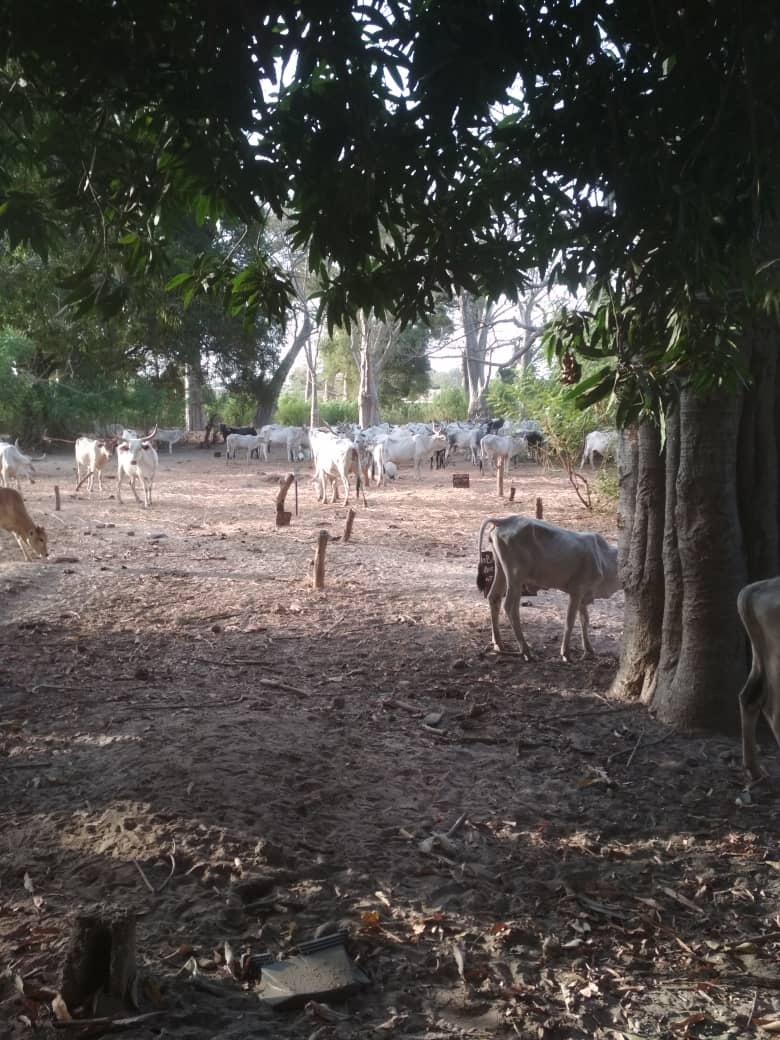 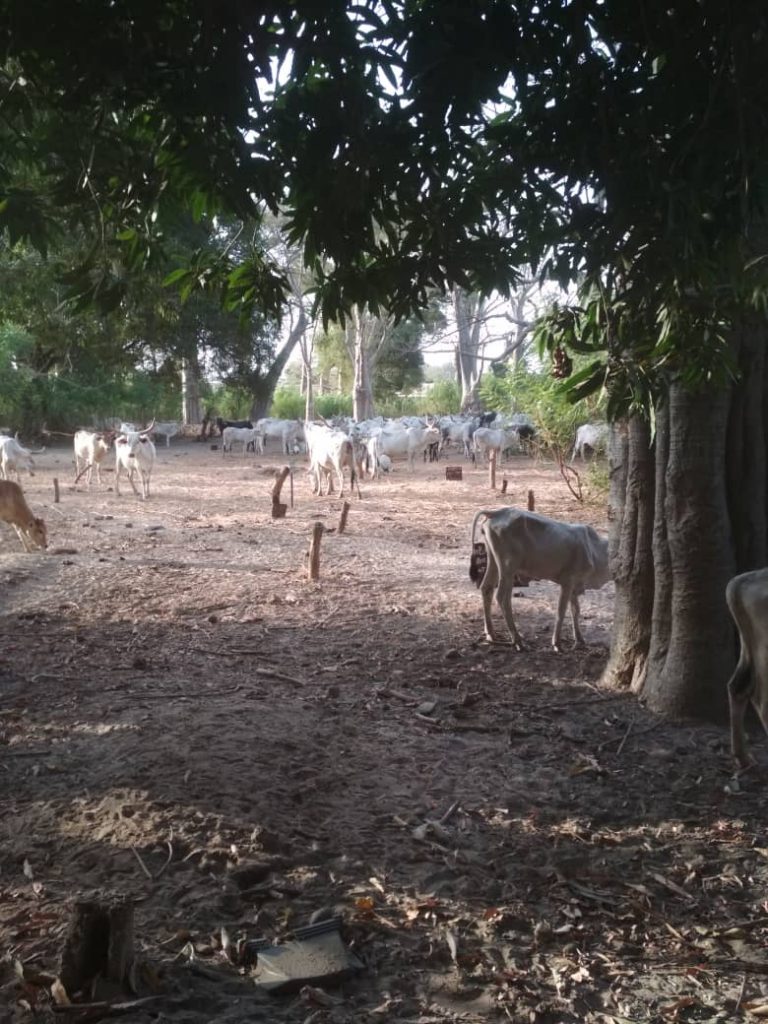 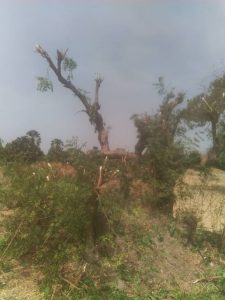 Confirmed information received by Trumpet Newspaper from Central Baddibou District, North Bank Region, has it that the people of Salikenni on Sunday 7th June 2020, seized 106 cattle from Senegalese herders who deliberately encroached into the Village cemetery and let their animals to graze on the trees and grasses in the graveyard. The cattle were said to have trampled on graves causing destruction and almost chew all the trees and grasses that are used by the villagers to cover graves during burials.

According to our sources, there are lots of armed Senegalese herders who crossed into the Gambia roaming with their animals in search of grassland. These herdsmen, eye witnesses intimated, were indiscriminately cutting down tree branches to feed their animals. Their action is causing deforestation and menace within the areas of their operations.

The incident at Salikenni, which almost turned into an armed confrontation, started when 106 head of cattle were found inside the Village cemetery which is fenced and locked with a padlock. But the unruly herders broke the padlock and let their animals in to graze in the graveyard thus prompting anger within the youth of the Village. Herders were confronted and they responded by brandishing their machetes and cutlasses in their attempt to scare off the villagers.

The behaviour of the foreign herders angered the Salikenni residents who responded with force, but the herders fled before the arrival at the scene of an irate crowd ready to defend their territory against the Senegalese encroachers. Eventually, they left 106 of their cattle behind which the villagers seized and demanded a ransom of D53, 000.

The villagers said they were aware of the presence of the Senegalese herders within their satellite villages who are bent on cutting tree branches to feed their animals. Villages like Dobo and Salikenni didn’t welcome them but to their surprise, they found out that they were allowed to lodge between Mandorry and Karantaba Villages in the same district.

Both Alkalou of Salikenni and Dobo were said to have asked them to leave the vicinity of their villages due to their behaviour and arrogant manner towards the natives of the area.

Our sources added that dozens of herders crossed into Gambia from Senegal with hundreds of cattle, goats and sheep looking for grassland to feed their ruminants. There is no grassland left for them in Senegal and water is also scarce. Due to such conditions, they would cross into Gambia every year to look for grazing areas.

However, angry villagers told this medium that they cannot accept the arrogant behaviour of the herders who were hell-bent on threatening the natives in the bushes.

“At times they go to women’s gardens and threaten them to give water to their cattle. Their presence here is a menace to our people, especially our women who are working on their gardens”, said one furious villager.

On this particular day, a villager found cattle roaming in the graveyard and noticed that the gate of the cemetery was broken and after questioning the herders as to how and why their herds entered the cemetery, they responded aggressively and even attempted to attack the said villager with machete, not knowing that he was armed with a gun. They subdued, but before they were able to remove the animals from the cemetery, villagers were alerted and dozens rushed to the scene. That was the time they took to their heels, leaving behind the number of cattle mentioned above.

Police were alerted and a team of Police Intervention Unit (PIU) was dispatched to the scene to prevent the “Salikenninkas” from attacking the herders at their base located between the villages of Mandorry and Karantaba.

The regional Police Commissioner Sowe was also at the scene and concurred with the people of Salikenni that a ransom should be paid. After negotiation, the Salikenni VDC agreed to seize three (3) bulls until their demands were met.

The rest of the herds were let go, while the three (3) big bulls were left with the VDC till the money is paid. Failure to pay the amount the VDC will take ownership of the bulls.

As per the Salikenni VDC rules, any animal found destroying the livelihood of the villagers or any property of the village, the owner will pay D500 per head of animal.

However, both the Divisional Governor Ebrima Dampha and District Chief Alhagie Jagne confirmed the incident but said they were not present at the scene. Governor Dampha directed the reporter to consult the Regional Police Chief who, he said, was at the scene of the incident.

Chief Jagne said he is aware of the presence of the Senegalese herders within his district but could not tell who host them. The District head said he had no powers to welcome the herders if they were not hosted by the villagers. He added that he believes the herders were either being hosted by Karantaba or Mandorry villagers.

“I am only aware of their presence here, but I cannot tell who host them. But I know foreigners cannot come and settle in someone’s land without permission from the land owners. It is the two Alkalou of Mandorry or Karantaba, [respectively] who lodged them. I only advised them to graze their animals on the dry grasses but cutting down tree branches will not be accepted”, said Chief Jagne.

He regretted the incident at Salikenni but assures that he will not interfere with the rules of the VDC. The Chief further said any one found violating the laws of the land by cutting down trees without authority should face the law, which he will defend.

Central Baddibou District chief recalled such incident almost occurred between the herders and villagers of Dobo but he had to intervene and ordered the herders, through the Police Chief, to leave the vicinity of Dobo as they were not welcomed by the villagers.

Police Spokesperson Superintendent Lamin Njie confirmed the incident, saying that more than a hundred cattle broke into the village cemetery thereby causing damages. Njie indicated that the Police were sent to the scene to defuse the tension.

PRO Njie stated that the matter is under investigation, and he therefore, urged the villagers and affected areas to exercise restraint as appropriate action would be taken.