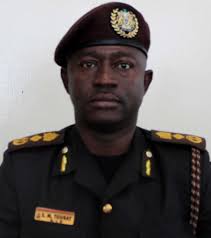 By: Fabakary B. Ceesay
The deputy Spokesperson of the Gambia Immigration Department, Cadet Inspector Muhammed Bah in reaction to an allegation leveled against Chief Yaya Jarjusey of Jarra West, said nobody can interfere with their new operational system and that they have very smart and competent officers manning various Bio-metric Identity cards processing Centres.
Cadet Inspector Bah made the remarks recently in an interview with this reporter at his office in Banjul. Deputy PRO Bah indicated that there is no way one can interfere with their new system, regardless of one’s social or political status.
Bah said for the issuance of the Bio-metric ID card, one has to be a Gambian with a valid document or an attestation either from the Village Alkalo or District Chiefs. He added that having Gambian documents is not a total guarantee but a fifty percent chance of getting or not getting the ID card.
He said all the applicants have to go through thorough interview and interrogation at their processing Centres. Most of their officers, he indicated, are very conversant with the regions they are operating at. He stressed that not all applicants processed were issued with ID cards. Instead, some applicants are processed only for them to be rejected in the system after finding out during the interview that the person is not a Gambian.
Bah disclosed to this medium that, once an applicant is rejected at one processing Centre that person cannot acquire ID card in any of the application Centres across the country. Adding that they now have a unique system where rejected applicants cannot go to another station to register. The Immigration officer informed that so far, their officers have confiscated more than 100 fake Gambian birth certificates and rejected almost two hundred applicants across the country.
The deputy PRO has no doubt about the competency of the Immigration officer stationed at Jarra Soma, and would doubt if that officer would allow himself to be used by a Chief or any other person for political means.
Cadet Inspector Bah made it clear that Village Alkalos, District Chiefs and Justices of Peace (JPs) can authenticate documents for applicants but that does not qualify them for automatic issuance of ID card.