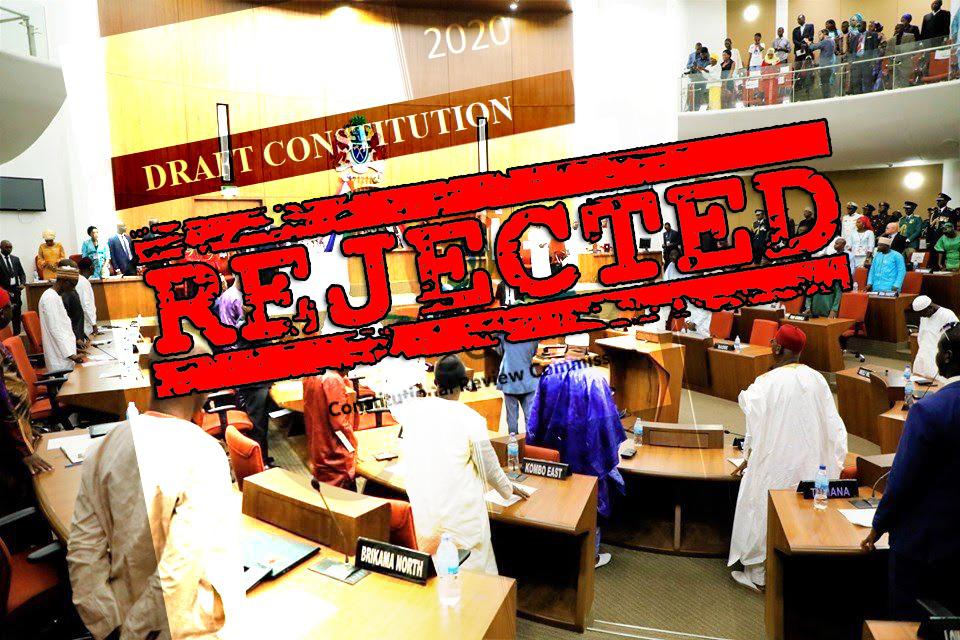 When Gambia decided to change its trajectory on December 1st 2016, we sought to build a vibrant and new democracy, which was to be inclusive and equitable, knowing that all Gambians had to be equally served under the rule of law. In order to transition from autocracy to democracy, a series of Transitional Justice processes were initiated to ensure the needed reforms that would put The Gambia on the path of democracy and development. These include the Truth, Reconciliation and Reparations Commission (TRRC), The Security Sector Reform (SSR), The Janneh Commission of Inquiry and a Constitutional Reform (CRC). This was to help us break with our dark past and lay the foundations for a new legal, political, social and economic architecture that will ensure the consolidation of democracy, the entrenchment of transparency and accountability, the assurance of minority rights, the elimination of corruption and impunity and guaranteeing civil, political and economic rights.

The Constitutional reform was the lynchpin of this entire process and it was a national priority for both Gambians and the coalition government as it was supposed to smoothly free us from the much tailored 1997 Constitution. A series of consultations with Gambians at home and abroad, and a bill in excess of D116 Million culminated into a consensual new Draft Constitution.

However, the aims and aspirations of birthing a new constitution came to a painful halt at the National Assembly when the Constitution Promulgation Bill 2020 was rejected by 23 National Assemble Members (NAMs). Clearly, these NAMs did not seem to value the voice of The Gambian people and the urgency for change leaving us disappointed and vulnerable as a budding democracy on the world stage. In addition, our current situation is also partly due to wrong choices made from the onset of the transition when, some key partners of the coalition entrusted with midwifing the process put partisan interest before national interest, abandoned the transition MoU, opted for Tactical Alliance, endorsed the gifting of vehicles to legislators, engaged in piecemeal legislation to suit their interests and encouraged President Barrow to renege on his campaign promise of serving for just three years as a transitional leader.

The Government of President Adama Barrow has also failed to deliver its promise and mandate to The Gambian people. By undermining the passing of the Constitutional Promulgation Bill, the Government has now derailed the entire Transitional Justice process, thus jeopardising the future prospects of this country. Citizens’ Alliance is disappointed that the Government failed to do enough to ensure the passing of a bill it took to parliament after investing so much of our resources. By all indications, the Citizens’ Alliance see no reason why President Barrow should not resign after failing to deliver every promise he made to The Gambian people, thus undermining his own legitimacy.

The defeat of the Constitution Promulgation Bill is an unfortunate situation that has the potential to derail the hopes and aspirations of The Gambian people. The Citizens’ Alliance remains with the zeal and conviction that all is not lost. These events should rekindle our resolve to work harder to build a Gambia for all, taking into account the welfare of future generations, through sacrifice and unity. Our progress depends on our decision as a nation to ensure that our future generations do not inherit the mistakes of the past. We therefore urge our elected representatives to do away with their differences and work together for the interest of the country.

Citizens’ Alliance continues to propagate for needed reforms and calls on the government to immediately unveil a clear strategy and a way forward towards a new constitutional order. Failure to pursue a meaningful constitutional change to provide a new legal framework for the 2021 elections should not be an option.

Citizens’ Alliance reminds Gambians that the ‘New Gambia’ project is not supposed to be based on religion, ethnicity, or unbridled partisanship. The purpose is to build a robust constitutional democracy and a just, inclusive and developed society anchored on solidarity and the rule of law. Now, more than ever, is the time to put country first and unite under a common banner of inclusivity, equity, and prosperity.