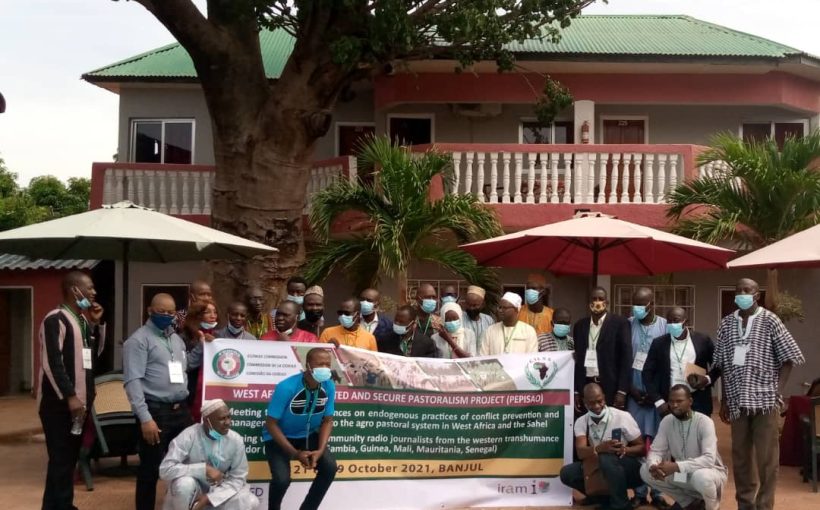 In their quest to raise awareness among journalists in West Africa and the Sahel on issue of agro-pastoralism and mechanisms for preventing and dealing with agro-pastoral conflicts, ECOWAS in partner with CILSS has declared opened a weeklong training of the community radio journalists from the western transhumance corridor.

The training scheduled for 21st to 29th October, 2021 holding at Baobab Holiday Inn, Bijilo, Gambia brought together 24 journalists from community radio stations in cross-border areas that are on the front line in the regions as they are directly concerned.

The 24 journalists were made up of 4 community radio journalists each from the Western corridor – Cote D’Ivoire; The Gambia; Guinea; Mali; Mauritania and Senegal who all converged in Banjul to cover 5 training modules; 1 training report; 24 radio productions with actors on the ground; 1 list of themes for the productions produced during the training and 1 list of finalized and broadcast-able productions. The opening of the training workshop was marked with series of speeches from the ECOWAS; PRA GRN CC Coordinator; while the Permanent Secretary CONACILSS – The Gambia delivered a welcome address.

The training workshop was meant to equip the community radio journalists in the western corridor for a better understanding of the agro-pastoral sector and improve treatment of information on pastoralism, with a focus on conflict prevention and management.

Expert trainers in pastoralism and community radio journalism provide the training through a participatory approach that frequently use concrete animation tools both in the classroom and in the field for the practical aspects.

The information, awareness-raising and training workshop for the journalists was conducted in both English and French languages.

However, CILSS with support of its partners organized three training workshops from 2018 to 2019 for more than 60 journalists in West Africa and Chad. These trainings have been beneficial for the region and contribute to developing knowledge and understanding of transhumance in West Africa by media men and women.

“An analysis of the productions of the trained journalists shows that only three out of 60 journalists trained are from community radio stations. Yet, these radio stations are the kingpins of communication and information for grassroots actors.”

To overcome this shortcoming, CILSS through the “Integrated and Secure Stock-breeding and Pastoralism in West Africa Project (PEPISAO),” a project coordinated by ECOWAS which has delegated the implementation of components 1 and 2 to CILSS, with financial support from the Agence Francaise de Development (AFD), has undertaken to continue capacity building sessions for journalists, focusing on community radio journalists in community and cross border areas, particularly in the three transhumance corridors (eastern corridor, central corridor and western corridor) – 20 journalists per corridor.