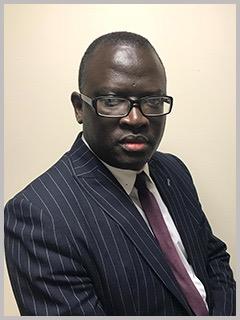 Lawyer Lamin L. Darboe of Basangsang Law Chambers defence counsel for Chief Superintendent Muhammed Kanteh, who was last week acquitted and discharged by a Brikama Court in a case versus the Inspector General of Police, is of the believe that the country is heading towards an outstanding judicial system compared to the past under Yahya Jammeh.

Darboe a nephew of veteran lawyer and Party leader of United Democratic Party (UDP) has been practicing law in UK since 2008, specialised in Civil Litigation, Employment Law and Immigration Law. He was called to the Gambia Bar in October 2010.

He is still a registered and practicing lawyer in UK at Toltops Solicitors, Barking, London.

Outside the Court room, on Tuesday 22nd September 2020, a glowing Darboe talked to the Trumpet after the Court delivered ruling and set free Mr. Kanteh on a ‘no case’ submission. Darboe is of the view that since the emergence of the new Gambia, Justice will prevail as to the expectation of Gambians.

“This ruling is a clear manifestation for justice and has built confidence in the country’s judicial system. I can tell Gambians to start having confidence in the justice delivery system. Today shows a clear example that powers cannot just drag people to Court anyhow and expect the Courts to convict them”, said Barrister Darboe.

“This ruling left nothing behind and since the beginning of this case even the prosecution knows they don’t have a case. It was more of a witch hunting, but justice is done today”, Darboe indicated.

Asked whether Chief Kanteh will be reinstated and paid his full salaries as demanded in their ‘no case’ submission, Darboe said that is the normal practice, even though the Court did not specifically mentioned it in the ruling. “We will wait for two weeks, if he is not reinstated and paid in full, we will write to the office of Inspector General of Police about it,” he posited.