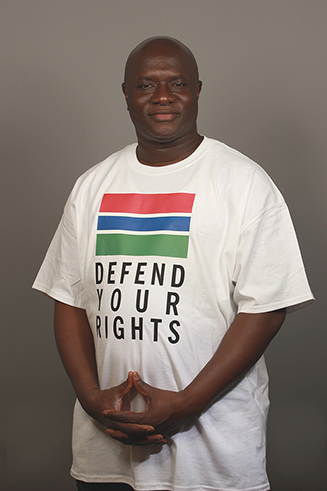 In the history of humankind, rebellions, resistance, revolutions, and uprisings by people have always occurred when they are faced with a power that posed existential threats to their lives and liberty. Sometimes violent and at other times non-violent – people have a right and a duty to ward off any force or power that sought to blatantly abuse their rights and destroy their lives with impunity. This is even more necessary when such power uses violence against unarmed and non-violent civilians in total disregard of laid down laws and rules.

We have seen these struggles in Africa in the fight against slavery and colonialism when foreign powers from Europe invaded our Motherland with the intention to subdue, enslave and exploit our people. In the so-called New World, enslaved Africans from Brazil to Jamaican to Haiti to the United States and elsewhere further rose up in various ways to defend their rights by both peaceful and violent means as the circumstances permit.

Even among the slave and colonising populations themselves, we saw how White Americans roe up against their British kith and kin who had colonised them in the United States. In their Declaration of Independence in 1776, the so-called Founding Fathers of America acknowledged that no government should be overthrown for simple reasons. But when a government is engaged in a sustained chain of abuses against the people, then the people have both a right and duty to overthrow that government in order to put in place a better system that will protect their rights.

Here is a relevant excerpt from their Declaration,

“Prudence, indeed, will dictate that Governments long established should not be changed for light and transient causes; and accordingly all experience hath shewn, that mankind are more disposed to suffer, while evils are sufferable, than to right themselves by abolishing the forms to which they are accustomed. But when a long train of abuses and usurpation, pursuing invariably the same Object evinces a design to reduce them under absolute Despotism, it is their right, it is their duty, to throw off such Government, and to provide new Guards for their future security.”

The Gambia under the Despot Yaya Jammeh was faced with such type of situation.  The AFPRC/APRC Regime unleashed a violent and abusive system in the Gambia where citizens became prey while the regime was the predator. While the country was presumed to be a democracy and governed in line with the Constitution which has guaranteed the sovereign rights of citizens, the Jammeh Regime instead chose to ignore, flout and damage the Constitution at will as it unleashed series of unending violations against the people.

The Regime did not only completely chose to ignore the rule of law and the institutions of accountability but it also went further to control, interfere and direct law enforcement and security agencies and justice delivery institutions to do the bidding of Yaya Jammeh against the righst and dignity of citizens. In effect, Yaya Jammeh had personalised the State so much so that each and every citizen was at the direct mercy of his whims and caprices. This was why there was no political party leader in this country who was not subjected to either arbitrary arrest, detention, torture or some other form of abuse including death, not to mention ordinary citizens! The evidence of the predatory nature of the Jammeh Regime and its violence and brutality against citizens are now being unfolded before the TRRC!

It is in this context that the armed attack to overthrow that regime on 30th December 2014 was both a right and a duty. To further clarify, the 1997 Constitution, under Section 6(1) states that anyone, who, “by any violent or other unlawful means, suspends or overthrows or abrogates this Constitution or any part of it,” or aid and abet anyone to do so commits a treason. By this single provision, it was obvious that Yaya Jammeh was therefore committing treason along with his APRC party and his supporters who were actively supporting him to abrogate the Constitution.

These violations range from the plunder of public resources, interference with due process, arbitrary arrests, detentions, torture, rape, enforced disappearances and summary executions – which are clear incidences of the suspension, overthrow, and abrogation of the Constitution. It is in light of this that the same Constitution, under Section 6(2) gives the right and duty therefore to every citizen to defend the Constitution against what could happen under Section 6(1). It went further in subsection (3) to state that it is no offense to resist the suspension, overthrow, and abrogation of the Constitution by anyone as contemplated in subsections 2 and 3.

Therefore, the narrative that D30 was any ordinary coup hence illegal is either a lack of political awareness and failure to acknowledge the tyrannical circumstances of the time or a matter of sheer dishonesty intended to aid and abet Yaya Jammeh. D30 would have been unnecessary and illegal had the Jammeh regime ensured that the rule of law was adhered to, law enforcement agencies and the courts operated with independence and professionalism where citizens were able to access justice without fear of reprisal. On the contrary, the Jammeh Regime rather ensured that citizens do not generally obtain redress and accountability for abuses meted out to them particularly in cases that involved the State itself and Yaya Jammeh in particular.

Rather citizens were made to face kangaroo courts under mercenary judges where they were imposed with trumped up charges and then sentenced to life imprisonment or death! Where citizens where not jailed or killed, their properties would be illegally taken away from them or summarily dismissed from their jobs, or their businesses illegally closed down or forced to flee the country of their birth and even denied their death bodies to return home! How long shall any citizen live under such climate?

There is also the misguided narrative that, after all, Yaya Jammeh could be, and was finally voted out through elections hence there was no need for his overthrow or mass uprising. While we commend our political parties and our citizens in the creation of Coalition 2016 which became victorious in the polls, Gambians must not ignore two major enabling factors that hugely accounted for both the electoral defeat and the ousting of Jammeh from power in favour of the Coalition.

The first enabling incident is the pre-election firebomb attack at the APRC bureau, which destroyed tens of thousands of voters’ cards. This incident was an indispensable enabler for the defeat of Jammeh at the polls by the Coalition. The destruction of those cards, most of which would be mostly foreign voters, denied Jammeh the usual victory he used to obtain in previous elections. Hence the victory of the 2016 Coalition was largely contingent on this incident and not necessarily that there was a coalition in the first place.

The second major enabling factor is the presence of international forces under ECOMIG. Dictators never concede to their opponent and leave power willingly and peacefully. Hence it was not a surprise that Yaya Jammeh, The Despot rejected the elections on December 7. Hence what made the Despot to capitulate and leave power eventually was the presence of a higher fire power that he saw in ECOMIG. Without that more powerful foreign force, Yaya Jammeh would have stayed put and the country would have been in some civil war until today!

As we therefore mark the sixth anniversary of D30 today, we must recognise that it is also the manifestation, the sum total and the culmination, and which cannot be separated from of all of the incredible efforts of Gambians in various ways and at various times to end despotism in our country. Whether it was November 11 led by dissident soldiers or April 2000 student demonstration or the pens and microphones of our journalists especially Deyda Hydara or the huge efforts of political parties and their leaders and supporters as well as the many acts of resistance from the diversity of civil groups, communities and ordinary citizens of all walks of life – the removal of the Yaya Jammeh Despotism was a determined and brave achievement of all of our  people.

In this preoccupation many lost their lives in ways that further manifested that the country was under an autocratic regime which was hellbent on suspending, overthrowing, and abrogating our Constitution by any means even unnecessary. The regime hunted down citizens for merely enjoying their rights or standing up to defend the Constitution – to maim and kill them as it liked.

Thus, it would be naïve for anyone to imagine that elections were enough to remove such a regime which was already 20 years old and posed to continue its hegemony. It would be naive for anyone to imagine that merely following due process was enough to secure rights. We cannot ignore that the Jammeh regime indeed had severely interfered with and controlled all justice delivery processes and institutions such that it was up to the regime to determine who could obtain justice or not; who could live freely or not and who could stay safe or not in the Gambia.

For the future, it is therefore necessary that citizens and the Government of the Gambia ensure that the Constitution remains supreme, respected, and always followed. This is the only path to prevent any attempt to plunge the country into autocracy hence give justifiable reason to citizens to use any means necessary to defend the Constitution.

This means all must adhere to the rule of law while ensuring that the processes and institutions set out to uphold the rule of law remain free from any form of control or interference by any person or authority so as to ensure that no right is violated and no rule is suspended, overthrown or abrogated with impunity. A system of accountability must be built and nurtured that gives hope and possibility that when there is violation there will eventually be redress without any fear of reprisal.

There is no government on earth that would not abuse rights and commit other forms of excesses. But so long as there are mechanisms to ensure accountability without fear of reprisal, then there would be no justification for a rebellion, coup d’état, uprising or other form of overthrow. Yaya Jammeh killed such mechanism. Let us create such kind of dispensation.

For The Gambia our Homeland