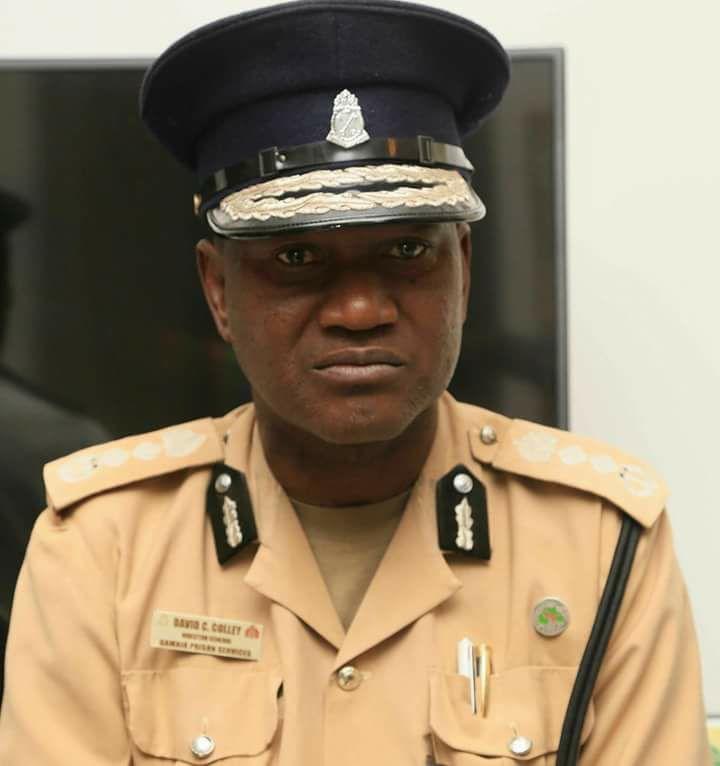 It was in January of 2007 that David C. Colley, former Director General of the Gambia Prison Services, took along with him five female officers of the Prison Services on a familiarization tour with the then newly appointed Interior Minister Mr. Ousman Sonko, to acquaint himself with security installations across the country. The tour members also included Ibrahim Bun Sanneh, former Director General of National Drug Law Enforcement Agency, officials from Gambia Immigration Department, Gambia Police Force and Customs.

Among the female officers, two were from Mile II State Central Prison whereas three came from Janjanbureh Prison. Knowing the type of Director General Colley was, the female officers, since at the beginning, were anxious of the prompt journey organised by their superiors. They were given a short notice to prepare for the trip. As if they knew their suspicion will turn to truth, Colley allegedly used his female officers to satisfy the sexual cravings of his boss Minister Ousman Sonko and friend Ibrahim Bun Sanneh.

The journey from Banjul to Basse, as investigated by Trumpet Newspaper, ended as an exploitation, hardship and broken heart for the ladies. Almost all then serving Prison officers were aware of the incident leading to a sudden divorce of one of the officers whose husband also a prison officer, could not bear the pain of embarrassment surrounding his wife. The man divorced her after learning about what transpired between his wife and their superiors during the tour.

According to the victims, on their first night at Farafenni, David ordered late Commissioner Kebba Bojang of Janjanbureh Prison to bring along three female officers posted at the Island’s Prison to meet with the delegation at Farafenni. On route, Commissioner Bojang had a vehicle break down, which delayed his arrival at Farafenni, causing David to send his buddies Lamin Jumbo Sowe and Sunkaru Jarjue (late) to fetch the female officers using his official vehicle.

Talking to three victims who preferred anonymity, alleges sexual exploitation, harassment and intimidation throughout the tour. And they were never paid traveling allowances or given good food throughout the trip. They said they were surviving on biscuits and junk foods to fill their bullies.

One victim said upon arrival at Farafenni from Janjanbureh at an odd hour, the erstwhile boss of the Prisons marched her into the room of Bun Sanneh and asked her to chat with him (Sanneh).

“Bun locked the door and asked me to undress but I told him I did not come for the trip to have sex with any man, and I am a married woman. Bun sent me out and started calling me names. I went outside crying; then the watchman of the guest house provided me another room to sleep in,” the alleged victim claimed. She added that in the morning, David continued bullying and calling her a witch and skin bleacher. “I was victimised throughout the trip for three days”, the lady said.

Our investigation reveals that for Bun Sanneh did not actually have his desires fulfill as all the picked girls refused to entertain him. On two occassions girls turned him down and he ended up sleeping alone both at Farafenni and Janjanbureh.

However, our investigation indicated that David had two ladies with him at the same time throughout the whole journey.

Furthermore, it had been gathered that David spent night with a female officer who was about to get married within days. As informed by female officers, David forcefully lured the lady into the journey knowing the fact that she was getting married over the weekend.

Our sources said David only allowed her to return to Banjul after a night with her at Farafenni. She was allowed to go and attend to her wedding plans, as alleged.

The female officers further said DG Colley chose from the girls which he wanted for himself and gave others to Bun Sanneh and Ousman Sonko.

Further in-depth investigation also reveals that the two female officers that were reluctant in having an intimate affair with David and his team were verbally assaulted and harassed by David. Trumped up charges were leveled against them to the protest of Commissioner Ousainou Colley and Deputy Director General Thomas Jarju.

However, after strong pressure from David on 10th January 2007, they were charged and had their salaries deducted and immediately transferred from their respective posts. Under David, one of the ladies continued to be a victim and seriously marginalized. She was denied promotion and even got demoted in 2004 on the orders of David to the amazement of fellow officers, both juniors and seniors.

In June 2008, then newly appointed Director General of Prisons, Ms.Rose Kylu, upon hearing the incident during the said tour, took the female officers to Kanilai to meet with former president Yahya Jammeh. Her plan was for the girls to narrate their ordeals to Jammeh himself.

Meeting Jammeh could not materialize, she approached then Inspector General of Police (IGP) Benedict Jammeh about the allegations against David Colley, Ousman Sonko and Bun Sanneh by prison female officers. IGP Jammeh, without wasting much time, ordered for an immediate investigation into the matter.

Unfortunately, the investigation could not continue due to the sudden demise of Madam Kylu when David bounced back as Chief Prison boss; though victims were interrogated and statements were taken for a possible trial. Eventually, the matter never went to Court.

Frantic efforts, with all available avenues, were made in order to talk to both David Colley and Ibrahim Bun Sanneh, but our efforts bore no fruits as the two were hard to get.

Efforts were also made via second parties but the two former security chiefs were reluctant to speak to the media about an incident they chided as “lies”.

Ousman Sonko is currently under detention in Switzerland for tortures and other crimes committed against Gambians during the 22 years of Jammeh’s regime.

Former Crime Management Coordinator (CMC) of the Gambia Police Force Mr. Burama Dibba, did confirm the alleged sexual abuse case by Colley, Sonko and Sanneh. According to him, he was CMC and the same time legal adviser for the Police, and he had advised that charges be brought against the three accused officials.

However, Dibba said the case could not proceed as then Interior Minister Sonko refused to be interviewed by investigators even though IGP Ben Jammeh invited him on numerous occasions for interrogation.

Dibba alleges that when the matter reached Yahya Jammeh, he immediately ordered the Police to halt the investigation. In a nutshell, Dibba believes Ousman Sonko used his Ministerial position and connections with Yahya Jammeh to throw the case under the carpet.

Who is David Colley?

During his unfinished marathon testimony before the Truth, Reconciliation and Reparations Commission (TRRC) on Thursday, 25th June 2020 David C. Colley claimed that he was hassled by both the Police and Prisons Department prompting the intervention of former President late Sir Dawda Kairaba Jawara because of his excellent performances as a young recruit. David also told TRRC that he was born in Kanilai.

Trumpet Newspaper can report to the contrary that he was born in Cassamance in a Village called Tilayi, a walking distance from Mundai also in Cassamance where the father of former President Yahya Jammeh came from.

David’s father Sheriff Colley came from Tilayi and his mother Fatou Jammeh came from Mundai. They later migrated to Kanilai with a young David who attended Primary School there and later proceeded to St. Edward Secondary School in Bwiam and graduated with a single pass (E) in Agriculture.

In early 1970s, he worked as a security guard and a substitute bar keeper (bartender) at a renowned club ‘Mass Club’ in Banjul. Then the club was known to be frequented by security officers from different forces during their leisure time, where David was known to almost all the senior officers as a easy go person. He was a likable lad.

He was only hassled based on his expertise as a good bar tender and senior officers from sister forces saw him as a good boy to run errands for them.

He joined the Prison Services in September 1976 and was first posted as a bar keeper. Due to his loyalty to Command and the emergence of the 22nd July 1994 Military takeover by a suppose uncle Yahya Jammeh, he rose through the ranks to the position of Director General.

He is the most feared Prison Director at all times by officers and among the prisoners due to his quite vicious nature. When he tours the prisons, he did it majestically like a King paying a call on his subjects. He used to rally almost the entire prison force with him whiles he tours the campus.

Thus he got the nickname ‘King Colley’.

But David was never sort of controversies during his tenures as Director General of Prisons. On several occasions he was accused, sacked, detained, charged and tried. Nevertheless, he always bounces back as head of the Gambia Prisons Services. Until the change of government in January 2017, when he finally got his marching orders as the head of the most feared and filthy prisons across Africa.