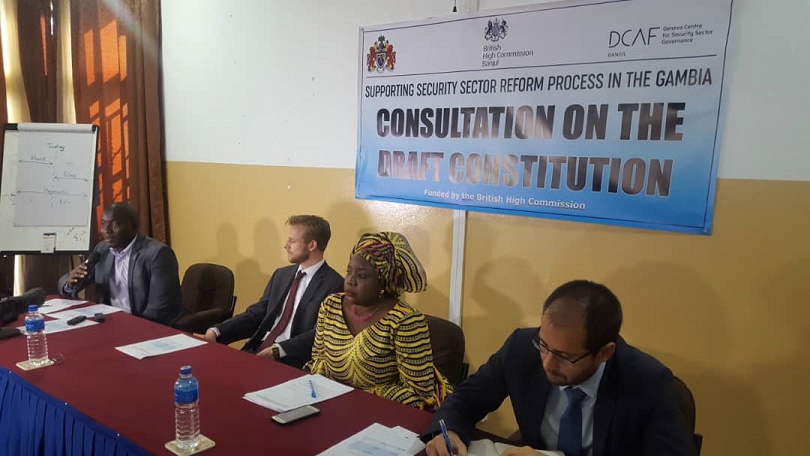 DCAF is an international NGO dedicated to improving the security of the people and states they live in within a framework of democratic governance and human rights as well assist partner states to improve governance of their security sector through inclusive and participatory reforms based on international norms and good practices.

Speaking on behalf of the Governor Mr. Modou Jonga CEO OF Brikama Area Council, said the ongoing security reform is very vita to ensure an effective and accountable security sector under a democratic dispensation. The reform is also vital for West Coast Region as it has witnessed and received security threats for the last two years to which includes political incidents and land issues.

Mr. Jonga called on the residents of West Coast Region to be on alert on any security threat and put national interest before personal interest.

Abdoulie Touray a representative of the Security Sector Reform (SSR) outline that SSR doesn’t operate on partisan politics neither on tribal line but to serve national interest and the improvement of the security sector thus ensuring professionalism and standards. ‘The Security Sector Reform strategy plan have made provisions to vet security personnel on their background to past records thus to promote efficiency and effectiveness’, said Mr. Touray.

Pansaw Nyassi Interim Country Head of DCAF reaffirm to the participants that the reform is meant to regain trust from the security sector to maintain professionalism and to avoid repetition the abuses by the former regime. Nyassi indicated that reforms further aims at putting policies that will guide the security sector in order to avert misuse of power by any regime.

He concluded by expressing gratitude to the European Union who funded the entire exercise.

Mr. Sualyman Kujabi Police Commissioner of West Coast Region reiterated the need for national security reforms indicating that not all security officers are bad or enemies of the State. He called on the SSR to build the capacity of the security officers to ensure efficiency and effectiveness.

Many speakers including Alkalos and Chiefs all expressed great expectation of the Security Sector Reform.