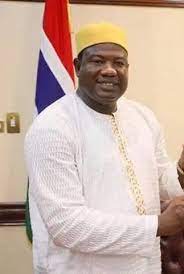 On 21st September 2022, the Editorial Management of the Trumpet Newspaper received a five page letter from Ida D. Drammeh & Associates Law Firm dated 19th September 2022, acting on behalf of Mr. Abubakary Jawara, the proprietor of GACH Construction that their client has brought to their attention series of publications posted and published on social media including a website call the Trumpet Newspaper and that the said publications were made on various dates respectively.

When the Trumpet Newspaper hit the newsstand in the Gambia we dedicated and promised ourselves not to deviate from what is expected of the media. As a newspaper, we would endeavour to publish anything that is in the interest of the Gambian public.

We did give due consideration to every article both professionally and ethically as the guiding principles of Journalism.

At the Trumpet, we always commit ourselves to follow issues in order to separate the grains from the chaffs, thus we endeavour to get every side of the story to our readership.

We will follow the truth even at the gate of hell. We would follow it as in the Biblical adage which says, “If you know the truth, the truth shall set you free”.

Let Abubakary Jawara and his GACH know that we have no interest in witch-hunting him nor did we have any hidden agenda against him in person. But if he thinks that he is a powerful businessman, close to the presidency and personal friend of President Barrow that he can get away with anything that comes his way, then he is mistaken in trying to intimidate or silence the Trumpet.

Since we have tried every avenue, doors and all means available to us to get to Mr. Jawara for his side to the stories as per the information we have about him failed for months which he abruptly and categorically rejected to the point of threatening the paper with a legal suit.

We decided to mount our own investigation into some of the documents, voice messages and text messages from Mr. Jawara in our possession for months before any publication was done. We did give Mr. Jawara ampled time and space to defend himself and narrate his side to every information we have about him.

This is how far a professional Journalist can go, any subject named or mattered in any story, a Journalist has to endeavour with sincerity to get information from all sides and angles. This is what Mr. Jawara refused strongly with threats of a legal suit thinking that will deter the Trumpet from publishing what is of importance to the Gambian public for accountability and transparency.

But since Mr. Jawara sees himself as too big to grant an interview or an audience to the Trumpet, we were left with no choice but to publish without his side to the stories.

Yet before we commenced any publication of such, we did write an editorial about his refusal for an audience and his threats against us.

Weeks before the letter from his counsel, there were people who reached out to the Trumpet and appealed on behalf of Mr. Jawara for a truce. The Trumpet decided to put a moratorium on some of the information on our desk about GACH on promise that Mr. Jawara will meet with any reporter from the Trumpet concerning any information about him.

Now that Mr. Jawara had instructed his lawyer to write to us demanding an apology, the editorial management of Trumpet will release all personal text messages, voice messages and documents in our possession in connection to Mr. Jawara and his GACH Company dealings.

The Trumpet Newspaper is here to stay and no amount of legal suit threats can make us bow or stoop low for him to trample on us. We shall refuse to be bought or sold.