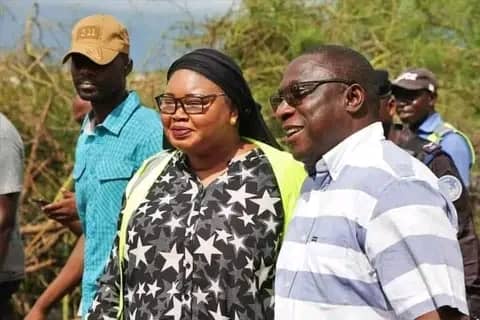 Since in the first week of July when Trumpet was reliably informed about a looming standoff at the Gambia Port Authority between some importers of goods that transits via the Gambian Port and Mr. Hadim Gai, the Chief Executive Officer of Gai Construction company, Trumpet newspaper has been trying in vain to get in touch with him for an interview but to no avail.

Until on Tuesday 2nd August 2022, he agreed to meet with the reporter for the propose interview on a range of issues concerning his company’s role at the ports and the Banjul rehabilitation project. The Trumpet also wanted to talk about Gai’s dry port situated along Bond road.

Via a phone call, Mr. Gai agreed to meet and urged the reporter to be patient with him until he reached his office. He promised to call back which he never did. On several occasions, the reporter called him and repeated the same words, “just be patient and give me time to settle at the office. I have your number and will call back”.

However, after hours of waiting, Mr. Gai never called back until the day’s working hours almost elapsed. several calls were made to him but no answer. The reporter call him with a different number which he picked but after identifying himself, Mr. Gai said, “You see my brother, the matter of handling things at the ports was cleared to the public by the management of ports and I am not a media person. As for the Banjul issue, I cannot dwell on it. I am a normal family man like you and have to go back home to my family after the end of the day work. I am so sorry I cannot grant you any interview”.

When the reporter insisted and requested for only five minutes of his time, he hung up the phone.

Below are some of the SMS Text messages sent to him!

“Hello greetings Mr. Gai, it is unfortunate that I spent the entire day waiting for you as you promised and then after a long wait and waste of my whole working day you turn our agreement down. I was at your office twice and am informed you left less than five minutes after we spoke”. He never responded.

Again on Tuesday 16th August, after several phone calls and no answer from him, another SMS text message was sent to him, “Hello good afternoon Mr. Gai, the Journalist is still waiting for your appointment as promised. We don’t want to publish without getting your side of the information we got. It would be very unethical if we do so. This is why since 2nd August we have been very patient with you”. Up to date Mr. Gai never replies.

To our amazement and contrary to what he said, that he is not a media attracted person, he was seen all over social and State media proudly talking and boosting about the Banjul project in the present of President Adama Barrow and Mayor (Mayoress) Rohey Malick Lowe just only few days after he turned down our agreement to grant us an interview.

Mr. Gai has been awarded the Banjul project contract on a silver plate without any bidding due to his connections with powers around the presidency. An amount of D$1.8 Billion was given to him for rehabilitation of roads, canals and quarters in Banjul. But the work as Gambians saw it only concentrated on roads and ignored water canals and quarters thus paving way for the current flooding in Banjul.

Mr. Gai also operates a dry port along the bond road which according to experts can also be a source of water blockage from Banjul hence the water from the city runs through a drainage system that is believe to be blocked by erection of structures including Mr. Gai’s dry port on the path of the water linking to the river at bond road.