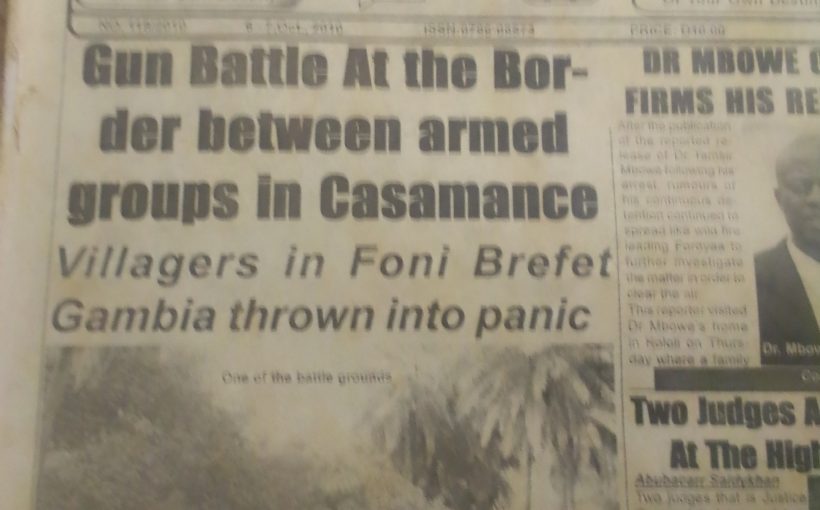 For many Gambians, the 24th January 2022, incident involving MFDC fighters and Senegalese ECOMIG forces within the Gambian territory is new and for the first time such a battle happens under our noise causing internal displaced persons and threatening lives of Gambian border Villages. It has always been the norm for the Gambian authorities to keep mute on MFDC incursions into the Gambia. 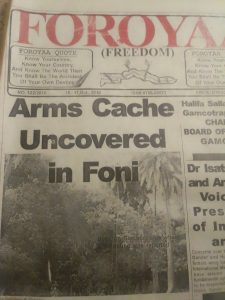 Though, some of these incursions were not deliberate but instead seeking sanctuary within the Gambian territory. This matter is an open knowledge to Gambian security forces and communities within the affected villages.

Between early and late October 2010, several gun battles took place within the borders of Gambia and Southern Senegal spilling into the outskirts of Gambian villages causing panic and confusion. Arms and ammunition were buried or left scattered all over Gambian territory and dozens of armed fighters arrested and tried in the Gambia.

According to Foroyaa Newspaper publication of 6-7 October 2010, “Reliable information gathered by Foroyaa from villages of Foni Brefet Districts, namely Sutusinjang, Bajana, Aslem and Bulock has it that gun battle has broken out between armed groups in Casamance and has affected the outskirts of Aslem and Sutusinjang villages respectively, thus throwing the entire villages into total panic and confusion. This reporter who was assigned to investigate the matter went to the ground and was told by Sutusinjang and Aslem villagers that heavy fighting has been going on within Casamance since Friday 1st October”. 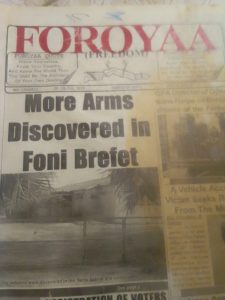 On the same issue Foroyaa published on 15-17 October 2010, “Information gathered by Foroyaa from eye witnesses in Bulock and Sutusinjang has it that arms and ammunition were discovered by villagers behind Aslem village near Bajana and another arms cache was also uncovered by personnel of the Gambia Armed Forces between Block and Bajana”

The intensity of the fighting between armed groups from Casamance into the Gambia was so scary that the Chief of Foni Brefet and then Brikama Area Council Chairman Mr. Sunkary Badjie convened a meeting with the district Alkalolu to address the situation.

This is what Foroyaa published on 20-21 October, “As the influx of armed combatants from Cassamamce raised questions of security in the Foni Brefet District, the Chief of Foni Brefet Alhagie Junkung Camara on Saturday, 16 October, convened a meeting with all the village heads (Alkalolu) within the district at his residence in Somita, to discuss matters relating to the security of the district. The meeting was chaired by the Chairman of the Brikama Area Council Mr. Sunkary Badjie” 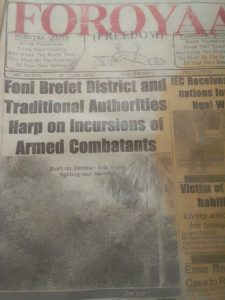 The insecurity of the people of Foni at the time also fell on deaf ears of the authorities and the government media houses, prompting Foroyaa Newspaper to write an editorial dated 20-21 October 2010, on the subject.

The editorial reads, “Nowhere in the world could armed combatants be hauled in security vehicles, armed caches unburied and arms and ammunition found scattered on farms without a State issuing a statement for the general notice of the populace. What is happening in Foni Brefet is an open secret. The recent meeting convened by Chief Camara is a clear testimony that the incursion of armed combatants from Casamance into his district has become a matter of concern and he is doing his utmost to put a stop to it”.

Again on 25-26 October 2010, Foroyaa publishes an article about more arms found in Foni, “Eyewitness accounts have revealed to Foroyaa that arms and ammunition have been discovered in the bushes behind Aslem village near Sutusinjang in Foni Brefet District. These weapons were found scattered near the garden of Sutusinjang women ”. 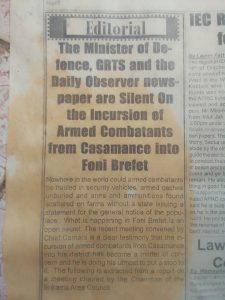 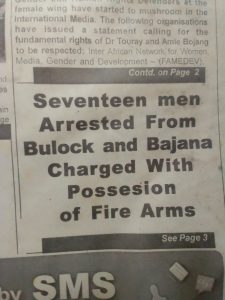 The then Spokesperson of the Gambia Armed Forces Lieutenant Omar Bojang confirmed the discovery of weapons including AK47 assault rifles, RPG shells and grenades.

Foroyaa also covered extensively the trial of several other suspected rebels from Casamance before the Banjul Magistrates’. They were charged with illegal entry into Gambia and possession of Gambian Identity documents. During that trial there were lots of damning revelations against several senior security officers who were accused by the rebels of facilitating them with the Gambian national documents through attestations from Alkalolu