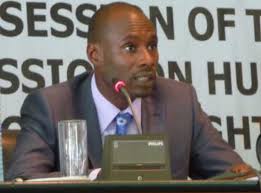 The lead Counsel of the Truth, Reconciliation and Reparations Commission (TRRC) Essa Mbai Faal on    Tuesday 9th  and Wednesday 10th  February 2021 turned the TRRC complex into a baptism ground as he referred to former senior officials of the defunct National Intelligence Agency (NIA) Mr. Foday Barry and Baba Saho “Peter and Paul”. The duo was season intelligent officers who had served under both the first and second republics manning different positions at the intelligent agency.

Foday Barry appeared before the Commission on Tuesday but denied almost all the allegations leveled against him by several witnesses who appeared before him. And on Wednesday Baba Saho also had his turn before the Commission, but was touring in the same line with his former colleague Foday Barry. In the middle of Saho’s testimony, the lead counsel though, what he was hearing from the witness seemed to be what he had already heard a day before. And this similarity left the Counsel Faal with no option but to say the two is like “Peter and Paul” singing from the same hymnal book.

Barry and Saho were mentioned by several witnesses for committing tortures at the NIA. However, when they appeared before the Commission both denied participating in any torture as claimed by witnesses. Counsel Faal at the end of the testimony of Saho, said “the testimony of Peter and Paul was so similar that, one could see it even at their closing remarks”.