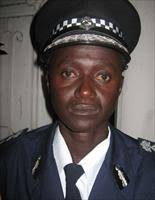 The former Inspector General of Police(IGP) Ensa Badgie aka ‘Jesus’ has thumbed up the Bishop of the Methodist Church in the Gambia for standing by the truth despite the prevailing circumstance under the former Gambian dictator Yahya Jammeh.

Ensa Badgie appeared before the Truth, Reconciliation and Repatriations Commission on Wednesday to testify about Jammeh’s witchcraft campaign and he (Ensa) subsequent arrest and detention. The former IGP said it was only Hannah Caroline Faal-Heim, the Methodist Bishop who confronted the former Gambia dictator Yahya Jammeh with the truth. He praised the Methodist Bishop for standing by Gambians and the truth during the political impasse in 2016.

Ensa Badgie aka ‘Jesus’ pointed out that if Gambian Imams and Pastors were braved like the Methodist Bishop, the former dictator would not have behaved that way. He said but Jammeh was able to silence every Gambian including religious leaders. ‘I respect Hannah Faal,’ Ensa Badgie told the Commission.

It could be recalled that in 2016 Gambians butted out the former dictator Yahya Jammeh through the ballot box. However, initially he accepted defeat and congratulated his opponent President Adama Barro the collation flag bearer. But after few days Jammeh made a u-turn and declared the election null and void.

Jammeh invited Gambian religious leaders to discuss the issue of peace in the country. But the Methodist Bishop was quoted as telling Jammeh in his face that he (Jammeh) was responsible for the stability of the country.  And that if Jammeh step down there would be peace in The Gambia.