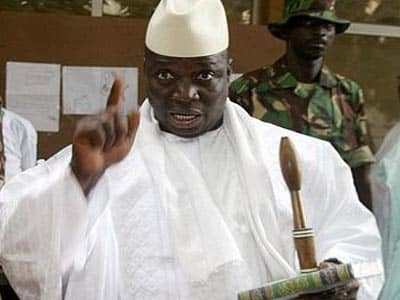 Reliable information from undoubted sources within Kanilai, confided to Trumpet newspaper that the former President Yahya Jammeh, via a telephone call threatens the natives of his home Village Kanilai to desist from what they were doing behind his back. The exile president according to sources, believe that his own people are doing lots of spiritual means against him so as to make him stay away from the Gambia for the rest of his life.

The furious Jammeh, who made a call from his asylum base in Equatorial Guinea, to one of his close relatives (name withheld), and asked him to converged the people at the Village Bantaba where he addressed them via the phone on a loud speaker.

Jammeh, speaking in the Jola dialect, could be heard shouting with anger given strict warning to those he presumed as his foes to desist from what they are doing spiritually against him.  He accused his Villagers of collaborating with enemies and fabricating lies against him for their selfish interest only.

He also accused the Kanilai natives of involvement in stealing his personal belongings and destroying them out of bad mind and jealous. He threatens them that he will deal with all those involved upon his return to the Gambia.

Jammeh uses foul language against the people gathered at the Bantaba and threatens them that he is coming back sooner than they expected.

Some of the Villagers who felt insulted walked away from the Bantaba whiles others stayed to listen to his empty threats. As for some they took the threats seriously but for some he is just an empty barrel making empty noise.