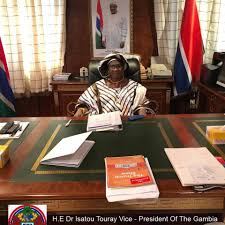 The Gambia’s governance and democratic transformance process has been recognized by the United States government. This is indicated in its Millennium Challenge Corporation (MCC) scorecard for the Fiscal year 2021. The MCC scorecard was presented to the Vice President Dr Isatou Touray through the US Embassy on Friday, November 13th.

At its quarterly meeting in December 2018, the U.S. Government’s Millennium Challenge Corporation Board of Directors re-selected The Gambia for continued threshold programme development focused on policy and institutional reform to spur economic growth and reduce poverty.The Board also directed MCC to explore regional investment opportunities in the Gambia and other compact partners in West Africa.

MCC was created in 2004 as a new and different model of development assistance – one focused on reducing poverty through economic growth. Built on the lessons of decades of development experience, MCC provides time-limited grants to developing countries that meet rigorous standards for good governance, from fighting corruption to respecting democratic rights, as evaluated on its scorecard. The programme takes a business-like approach, with bedrock commitments to data, accountability, and evidence-based decisions.

During the briefing which took the form of a virtual meeting, the MCC Threshold Department’s Managing Director, James Gerard, started by indicating the impressive performance of the Gambia in key MCC indicators.He affirmed that The Gambia has passed the assessment test for governance, democratic rights and economic freedom.He further revealed that The Gambia is doing well in their indicators especially on control of corruption and rule of law,as both rated at 92% on the scorecard, and that the country has secured 12 green out of 20; which means it has shortcomings in 8 critical areas.

Mr. Gerard informed that this information has been gathered by the Freedom House and that it encourages the government of The Gambia to do more to enable it retain the greens on the scorecard and change the red to green as indication for good governance that translate to improving the well being of its people.

He noted that the scorecard will be available to the public as it provides information regarding numerous indicators relating to democratic activities, economic freedom and public resources.

Reacting to the information about Gambia’s good performance on the MCC scorecard, Vice President Dr Isatou Touray said she was overwhelmed and happy to note that Gambia has gone this far in fulfilling its democratic obligations.

She thanked the ambassador of the US to The Gambia, and the MCC team for the good work they have been doing in The Gambia and extends President Barrow’s good will message to the American people.

Vice President Touray went on to assure the MCC team that The Gambia will work hard to ensure that there are improvements in areas where they have shortcomings or where they under-performed. She noted that the scores are great achievements for the government of The Gambia and all Gambians at large.

The Vice President went on to acknowledge the efforts made by Gambians and the government of President Barrow for making the worthwhile gains. This she said is possible despite difficult circumstances,and past experience of tyranny and maladministration.

The meeting was attended by the representatives of the Ministry of Foreign Affairs, Finance Ministry, Minister of Petroleum and Energy, the Director of Department of Strategic Policy and Delivery, and the Gambian ambassador to the United States.