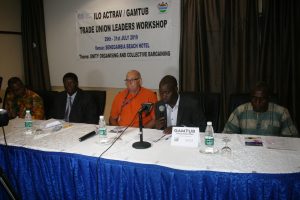 The union leadership’ workshop with the theme: ‘Unity Organising and Collective Bargaining’ brought together over thirty leaders from different unions in the country. The forum was scheduled to cover among other cardinal areas such as trade union governance as a tool for effective action; GamTUB mission; labour administration in The Gambia; draft trade union Bill or ACTRAV presentation; Convention 87 and 98. In addition, it will as well cover social dialogue and leadership as a tool for social justice; governance and resources, the impact of trade union advocacy strategy for maximizing action; mapping and organizing sectorial union (public service); The Gambia’s path way to prosperity – A role of labor; ECOWAS Protocols on Freedom of Movement of Goods, Persons and Services; Role of civil society organizations in the socio economic development of new Gambia.

In his opening remarks, Kebba Ceesay GAMTUB Chairman disclosed the special interest ILO is having for the development of the Gambia trade union movement. He said ILO interest in the union did not start now but some years back as “they have been urging the unions to unite and become one.”

Two years ago, he said the unity among the unions come to past as some of the unions come together under one umbrella to form the trade union bureau known as Gambia Trade Union Bureau (GAMTUB), a platform that represents the voices of workers.

Chairman Ceesay as well dilated on the bureau activities which among them are capacity building of the members, creation of sectoral unions by making sure that unions are form exclusively by the workers union of such sectors.

He thanked GAMTUB’s partners – ILO, Solidarity Center, UNISON among others for their supports.

Other speakers at the opening ceremony included Sea Herve from ACTRAV and Jim Bell National Project Manager of UNISON from United Kingdom.