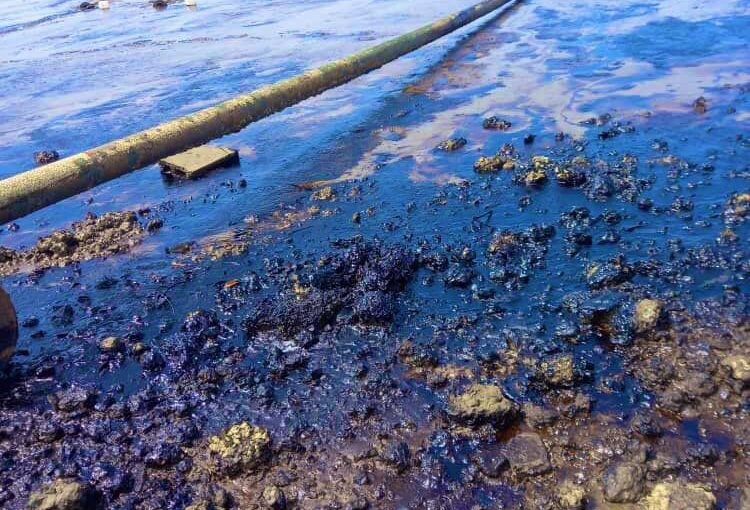 The General Manager of Gamperoleum Company at the country’s fuel depot, Mr. Yero Jallow is the least happy as to why the information about the oil spill into River Gambia by one of their oil supplier ships get to the environmentalists and the media and vowed to deal with any staff found given out information.

In a strict warning letter to all the staff, GM Jallow pointed out his dissatisfaction about the way and manner information is taken from their depot and how photos of the spill were secretly taken from their side of the river. He blames the security of lack of competency for failing to properly check all visitors and staff.

The letter which was intercepted by Trumpet Newspaper, specifically laments the unhappiness of the management of Gampetroleum as to how the Gambia Environmental Alliance was able to lay hands on first class information about the oil spill and photos taken at the scene.

The letter reads, “The Gambia Environmental Alliance sent a twit on 30th May 2022 stating that the Gambia’s main oil reserve at Mandinary happened to leak tons of oil into tributary and riverbank of the Gambia (really?) The photo that was shown on the twit indicates that it was taken by someone standing at the riverbank, meaning the person got there with a mobile phone which is a breach of GP security protocols. So why was it allowed to happen? Consequently, this information cause an unnecessary alarm within Government Regulatory Agencies which could have been avoided had it been restricted to the official communications as required by the emergency response plan that was followed by the company”

Trumpet Newspaper is reliably informed and carefully investigated reveals that the oil spilled into river Gambia started on 28th May after midday from an oil delivering ship at Gampetroleum depot in Mandinary. So far the oil spill has expanded and covered an area of about 50 KM of the River Gambia Coast and seriously affected the Pirang Village side of the river Gambia.

Our investigation also reveals that this oil spill incident is the worst case that ever happened in the Gambia Marine Environment and the pollution is detrimental and would lead to signs of losses of biodiversity along the river Gambia. The pollution has the potential to contaminate the fresh and salty waters and waterways in the River Gambia.

An environmental expert who spoke to Trumpet on anonymity said, “This pollution will affect the mangrove distribution by causing massive die-back of mangrove species which will also affect the livelihoods of the marine dependent like oyster harvesters, fishers and Eco-tourism which served as the second Gross Domestic Product (GDP) to the economy of The Gambia”.