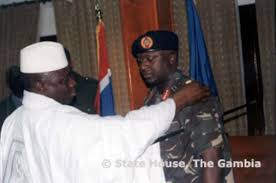 Investigation by Trumpet Newspaper during the December 2016 political stalemate after Jammeh refused to step down, can firmly reveal that former Chief of Defence Staff (CDS) retired Lieutenant General Lang Tombong Tamba was among former and serving soldiers who planned to step in and convince officers and soldiers to rebel against Yahya Jammeh before the entry of ECOMIG forces into the country.

According to sources that were part of the plan with Tamba, they were to enter Yundum Barracks through the back door from Yarambamba Estate end where General Tamba was waiting to lead the invasion with assistance from some rebelling soldiers and officers.

After securing positions into the barracks, sources reveal, Tamba would use his former CDS dispensation to lure soldiers and officers into following him.

Unfortunately, the plan was aborted when information came in that some senior rebelling officers and soldiers have left for the border to meet and strategies with ECOMIG forces.

Tamba was already housed in a residence at Yarambamba waiting for a particular soldier (name withheld) to bring him uniform to lead the operation.

In a chat with this reporter, though reluctant and surprise, the retired General said “you see I am a soldier and my duty is to defend this country. I feel sad to see foreign forces into our country”.

On how he would convince officers and soldiers to follow his command against Yahya Jammeh, he said “I been in the force for years and have commanded different positions and had a good rapport with soldiers. They will follow my command for the interest of the country”.