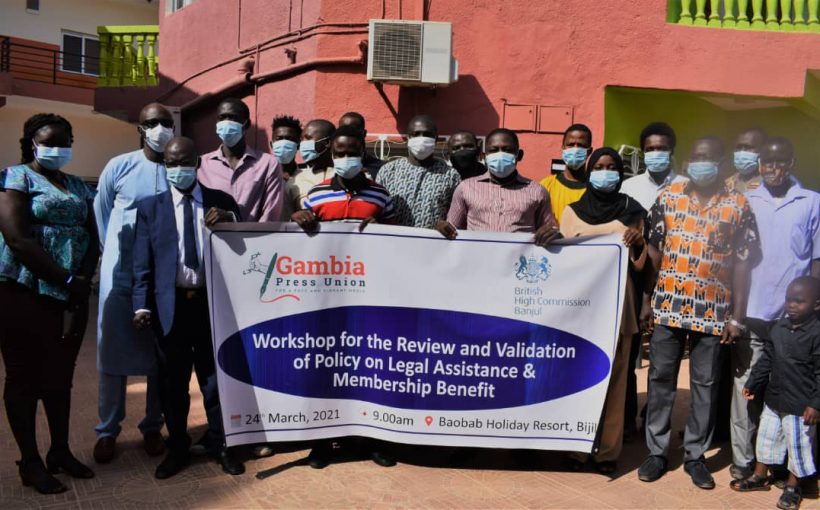 The Gambia Press Union, GPU, on 24th March, 2020 reviewed and validated two policies: one on Legal Assistance,and another on Membership Welfare.

The Legal Assistance Policy is intended to guide and facilitate the Union’s provision of effective and timely legal assistance, advice and representation for the journalists. It is also meant to provide basic legal training, knowledge and insights on aspects of law relating to the work of journalists.

The Membership Welfare Policy establishes a framework for the provision of services and access to facilities and amenities offered by the Union to its members. The policy outlines a range of direct and tangible benefits for union members. It also set rules and standards for service delivery in a manner that is efficient and equitable.

The two policies are developed with funding from the British Government’s Foreign, Commonwealth and Development Office under the project “Promoting a culture of access to information and enhancing the capacity and welfare of journalists”.

“Over the past two years, there has been a paradigm shift, we focused more on initiatives that are geared towards promoting the welfare of journalists,” Lamin Jahateh, Programme Manager of GPU, said during the validation at the Baobab Hotel in Bijilo.

He said that the policies would serve as tools guiding the Union’s actions and engagement towards its members and the services it offers.

Over the last decade, two-thirds of funds spent on legal assistance went to non-members of the GPU. Now, the Union want to change this by ensuring benefit from its services is tied to membership.

“The policies are not intended to discriminate, rather they are meant to empower and encourage journalists to take more commitment towards the Union,” according to Sheriff Bojang Jnr, the President of the GPU. “We stand for the men and women who show commitment by registering formally and paying their dues.”

He said the policies are purely a contractual agreement between the GPU board and union members who voted them into office.