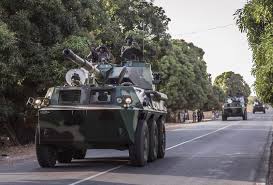 Official information reaching Trumpet Newspaper confirms that the General Transport Union (GTU) is least happy with the much talk checkpoint at Bwian mounted by ECOMIG forces in the Gambia.

The check point has so far cause lots of controversies between the commuters and driver plying the South Bank road with ECOMIG soldiers manning the point. The soldiers are of the Senegalese unit of the West African Forces that enters the Gambia on 19th January 2017 amid the political impasse that hit the West African nations for a month.

Several deadly unexpected accidents had occurred at the said point due to the manner the road barriers are fixed and mounted. It forces vehicles to zigzag between the barriers consequently causing heavy loaded vehicles, (trucks, Lorries) to slide off the road causing accidents.

In a communiqué date 23rd June 2020, after a two day consultation meeting between the members of the General Transport Union, Secretary General and Head of the Civil Service,held at State House chaired by permanent secretary Ministry of Finance and Economic Affairs, was tasked to look into the demands by GTU.

Among the concerns raised and demands by the GTU was the removal of ECOMIG check point at Bwiam, reduction of check points on the roads, revisited the manner of enforcing spot fines on drivers and allocation of public car parks across the country.

However, at the end of the day both parties agreed for the government to identify potential sites for car parks across the country and works towards in developing the sites in a short term, the Inspector general of Police to provide GTU, Ministry of Transport, Works and Infrastructure and Ministry of Trade and Regional Integration with lists of official check points across the country.

The parties also agreed to engage the ECOMIG mission the country to address the safety concerns at the Bwiam checkpoint and for the GTU to acquaint its members with the revised Road Traffic Act of 2013 and to educate their members with it. Both sides call for line of communication with the government in a coordinated manner.

However, since after the signing of this communiqué three months a go 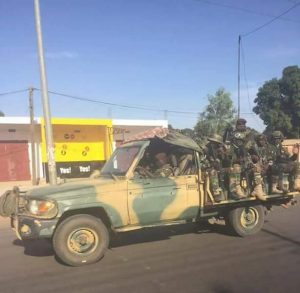 , Trumpet newspaper can reliably report that the ECOMIG Bwiam checkpoint is still there and intact as it was since its inception.