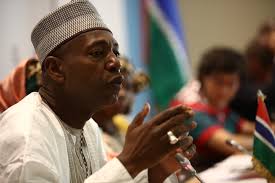 President Adama Barrow has made it categorically clear to the 20 member delegation of National Assembly Members that paid a courtesy call on him in a form of ‘Salibo’, that Honourable Hamat Bah,  Minister of Tourism and Culture, will be the last Minister and passenger he will fire from his government or ask to drop from his bus.

The president made this remarks when certain National Reconciliation Party Parliamentarians raised a concern about the information that was published by a local online newspaper that Mr. Bah was sacked from Barrow government. President Barrow only laughed and said that information was not true and that Hamat Bah will be the last Minister he will drop from his cabinet.

Barrow also added that his government will never joke with the likes of Minister Bah whom he described as a patriot, loyal and staunch supporter of his national development agenda. He stated that the role that Hamat Bah played during the presidential campaign can never be question.

President Barrow further said Hamat Bah had played a crucial role during the political impasse and there is no way he would sacked him without a genuine cause. He assure the NAMS that if he was to sack Minister Bah he would have done it since last year when Hamat made remarks against neighbouring Senegal and the Kingdom of Thailand, which almost caused a diplomatic chaos.

The NRP Parliamentarians thanks the President for assuring them of the safety of their party leader in the cabinet and having confident in him. They also assured of him of their support at all cost in achieving his goals for the Gambia.