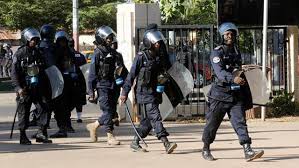 In her emotional and heart touching testimony before the Truth, Reconciliation and Reparations Commission (TRRC), Bintou Nyabally a resident of Bakoteh and supporter of United Democratic Party (UDP), said she was arrested on 19 May 2016, alongside Mariama Sandeng the daughter of late Solo Sandeng by officers of Police Intervention Unit . They were arrested at Bond Road on their way to attend the Court hearing of Ousainou Darboe and UDP executive. The duo were held by PIU at Bond Road from 08: 00hrs to 14:00hrs. Later taken to PIU Campus at Kanifing for interrogation.

According to her, whiles she was in detention at PIU with Mariama Sandeng, an officer she identified as a native of Jambajally gave her a nasty slap. After taken their personal details, she and Mariama Sandeng were locked in a dark iron cell door. Mariama was taken away by officer call Sanneh who later return for her with another officer. She said the two officers were speaking in Jola language.

Officer Sanneh threatened her whiles the other officer light his cell phone lamp and held her from behind. Sanneh started to bombard her with insults and then raped her. After the rape, Sanneh told her in Jola language ‘You are rude’.  The second officer also raped her using a condom. Both officer Sanneh and the other who used condom forcefully had carnal knowledge of her against her will and consent.

In the morning she met Mariama Sandeng and asked her if she was subjected to the same form of treatment but Mariama told her she was not touch and nothing happened to her.

After narrating her ordeal to her Mother, she was locally treated until she recovered from the pain and trauma of her encounter with the two PIU officers.