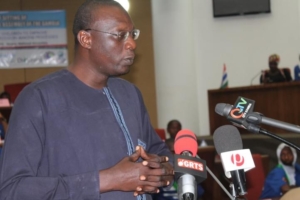 The Elections Act guides the conduct of private radio and television stations during elections, i.e. from the start of official campaign period to voting day. However, a scan through the various private radio and television stations indicates that there are concerns in their manner of coverage for which the IEC should monitor and take the necessary steps to ensure compliance hence guarantee fairness.

The IEC’s Media Rules which comes within the purview of the Elections Act (sections 94 and 95) states that private radio and television stations to provide coverage to all candidates without discrimination. However, when one checks the various private stations, one can notice how some stations give more coverage to some candidates than to others. In some instances, some stations report on only one candidate, which is the incumbent Adama Barrow’s rallies, while no other candidates’ rallies are covered. For example, QTV has dedicated its entire election coverage and advertisements on only the incumbent, Adama Barrow to the total exclusion of all other candidates. Why? IEC should address that.

Furthermore, many private and radio stations are carrying party/candidate advertisements. But the IEC Media Rules and the Elections Act require that these stations do not differentiate charges between candidates. To make sure there is no differentiation, the law provides that radio and TV stations send all copies of invoices and receipts to the IEC before they air or broadcast those advertisements. Therefore, have all radio and TV stations who carried out these political advertisements submitted their invoices and receipts of the advertisements to the IEC first before they carried the broadcasts?
In fact, the rates to be charged by the radio and TV stations have to be agreed first with IEC. The rates then will have to be published and provided to each candidate. This measure is to ensure that no media house is advantaging or disadvantaging any candidate and that all candidates are treated fairly. So far, I have not seen any published rates from the IEC in the media.
Furthermore, the election Media Rules provide that these political advertisements can run for a maximum of 10 minutes per day, and nothing more. In addition, the Election Act provides that each radio and television station should provide 5 minutes of airtime to each candidate to broadcast its message free of charge. Are radio and TV stations adhering to this rule?
IEC needs to monitor the media to ensure compliance and fairness.