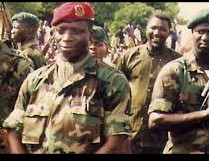 Reliable information from indisputable sources within the defunct notorious National Intelligence Agency (NIA) has it that Mr. Landing 13 Badjie, acting on the orders of the then Junta leader Captain Yahya Jammeh, and in collaboration with some senior and junior officers of NIA, has murdered a Whiteman who was arrested at the airport upon arrival in the Gambia. The man was suspected of been a mercenary sniper who was sent to the Gambia by certain Western countries to assassinate Yahya Jammeh.

The Whiteman, whose nationality is yet to be established by this medium, was taken into custody by NIA officers in 1996 during the height of the transitional period from Armed Forces Provisional Ruling Council (AFPRC) junta to civil rule.

According to our sources, the man was arrested at Banjul International Airport after security officers found a bulletproof vest and a Military camouflage in his luggage. He was taken into custody for interrogation at the NIA Headquarters in Banjul. At the time, Landing 13 Badjie was the acting Director of Internal Security and Operations at NIA.

Upon the arrest of the man, Jammeh was informed and made to believe that the man was an assassin sent to kill him. One of our informants said the information about the Whiteman was relayed to Yahya Jammeh by 13 Badjie in his presence. He overheard Jammeh instructing 13 Badjie to ‘’Finish him up’’.

Sources further indicated that 13 Badjie picked some senior and Junior NIA officers and instructed them to torture the man. After the torture, he was bundled, wrapped in a sack and driven to Kalagi Village where he was thrown over Burmang Bridge. Senior and junior NIA officers allegedly involved in the matter were Landing 13 Badjie, Jalamang Janko, Musa Kinteh, Dodou Sillah and Sheikh Omar Jeng known as ‘Sir Jeng’.

Landing Badjie known as ’13 Badjie’, was a senior Police Officer of the Gambia Police Force before the 22 July 1994 Military takeover. He manned several key positions within the Police before been move to NIA as Director of Internal Security and Operations. He was also onetime Inspector General of Police before been removed. In 2006, he bagged an international appointment under the United Nations.