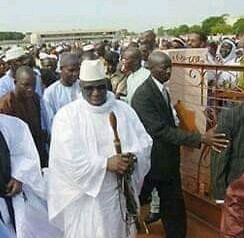 Dependable information reaching the news desk of Trumpet Newspaper from Equatorial Guinea indicated that the former Gambian President, Yahya Jammeh has celebrated Eid-ul-Fitr locally known as Koriteh in the capital of Equatorial Guinea, Malibo. On Tuesday 4 June, he joined thousands of Muslims at a praying ground to observe the end of Ramadan in grand style.

According to sources within the executive circle of the Alliance for Patriotic, Re-orientation and Construction (APRC), the party’s founding father now in exile in the Equatorial Guinea, went to the praying ground amid cheering and waving by Muslims who converged in Malabo to observe the Eid prayers. A proud looking Jammeh dressed in his usual white gown, holding long prayer bead and a sword, wearing dark sun glasses, stormed the praying ground where he was received by the Imam of the congregation to mark the end of Ramadan.

The former president, Sheikh Professor Dr. Alhagie Nasirudeen Amir Al Mumineen Yahya Abdul Aziz Janus Junkung Jammeh was in a happy and jubilant mood when he was welcomed by a huge crowd of Muslims and interested onlookers. Dependable information indicated that the former Gambian head of State “majestically walked” into the praying yard in Malabo, amid cheering, and joyous mood, from the crowd with tight security like a sitting president.

Reports added that Jammeh is being treated like a co-president by his host President Teodore Obiang Nguema Mbasogo.

During last New Year celebration, President Obiang was seen together with Jammeh dancing holding his usual sword and bead, dressed in white kaftan.

Equatorial Guinea has a Muslim Population of between 5 to 10 percent of their Population of 722,254. The majority of Muslims in Equatorial Guinea today live in the Northern and Northeastern parts of the country where the Fang ethnic group live in large numbers. The Muslim population in the remaining parts of the country is very small. Muslim workers who came from Nigeria in recent years to work there are said to have contributed to the increase of the Muslim population in the country.

Muslims in Equatorial Guinea live in difficult political, as well as economic conditions. In addition to having no political representation, the office of Mufti, which was established to regulate religious activity but remains unauthorized, is not taken seriously by the state. As there is no authority to which the mosques in various cities belong, the ties among the Muslim minority are quite loose.