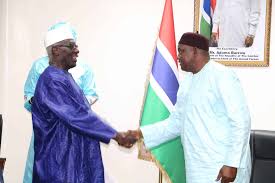 The Trumpet Newspaper is reliably inform that the report of the famous ‘Janneh Commission’ which has its sittings at the Djemba Hotel to look into the financial transactions and dealings of the former President Yahya Jammeh and his business associates will on Friday 29 March submit its report to President Adama Barrow at State House in Banjul.

The Report also added that the Janneh Commission has generated D 67,894, 170.00, from the sales of 138 tractors and 458 vehicles including scraps owned by Yahya Jammeh

The report further indicated that the Commission has also generated D 8,302,970.00 from the sales of 725 heads of cattle as well as Bank accounts of Yahya Jammeh that were frozen.