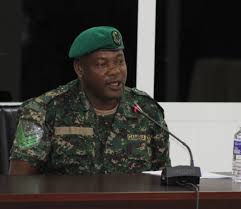 By: Fabakary B. Ceesay & Lamin Hydara

Inhabitants of Chogen, the native Village of Omar A. Jallow, known as ‘Oyaa’, a renowned member of the assassin team of former President Yahya Jammeh called the Jungullers, had on Tuesday, 6 August 2019 evacuated the women, children and the elderly to nearby villages following threats of reprisal from unknown persons.

Chogen is a small settlement in Lower Badibou, North Bank Region (NBR). The village is inhabited by Fulas and Bambara-speaking Mandinkas.

The Village Alkalo, Mr. Momodu Sowe, received a call from a man who identified himself as a member of the Gambia Police Force’s (GPF’s) Police Intervention Unit (PIU) stationed at Kerewan, and informed him that they (the PIU personnel) have received information that some disgruntled people were planning to attack their village in revenge of the confessed crimes committed by their son, Omar A. Jallow.

The Village head, in turn, apprised his people about the said alert from the PIU officer in Kerewan. Due to some level of fears, the men folk decided to evacuate their women, children and elderly to the nearby settlements of Mbamour Kunda, Foday Biram and Dimbuka, respectively. Donkey, horse and oxcarts were used in transporting these vulnerable Chogen villagers to the aforementioned villages for their safety, in the event of any onslaught on Oyaa’s village.

The Alkalo told this medium that he had reported the matter to the Chief of Lower Badibou, Mr. Fabala Kinteh, who visited the village and assured them of their security and safety.

Alkalo Sowe lamented that villagers cannot understand why anyone would threaten them for the misdeeds of Omar.

The Alkalo maintained that none of Omar Jallow’s immediate family members currently reside in that village.

Hear the Chogen village head; “Though Omar was born and raised here, but for years now, none of his immediate family resides in this village.”

‘’How can they threaten us for a crime we have no idea or knowledge of’’? Sowe rhetorically asked.

Meantime, Chogen Villagers who spoke to The Trumpet Newspaper averred that they all share similar feelings with the entire Gambian populace, reasoning that on the day of Omar’s testimony at the TRRC, the ‘entire village listened to him with a heavy heart and disbelief’. They likened that fateful day to ‘a funeral taking place in Chogen’, seeing their son confessing to mass murder.

On Tuesday 23 July, Oyaa Jallow appeared before the Truth, Reconciliation and Reparations Commission (TRRC) and confessed his participations in the killing of 45 persons and committing several forms of human rights violations against Gambians and non-Gambians.

The announcement by the Attorney General and Minister of Justice Abubacarr Tambadou to release the self-confessed killers from custody has sparked heated debates from all sections of the Gambian society. Several people, including family members of the victims are against the move taken by the Justice Ministry.

However, on Saturday 10 August, Gambia Radio and Television Services (GRTS) announced the release of jungullers, Lieutenant Malick Jatta, Warrant Officer Class 1 Omar A. Jallow, Staff Sergeant Pa Ousman Sanneh and Sergeant Amadou Badjie known as ‘Chairman’. The four were among the members of the Jammeh hit-squad detained since the advent of the Barrow Government. They were witnesses at the ongoing TRRC.

Their release would enable them to celebrate the Eid-ul Adha (Tobaski) with their families as victim’s families and other human rights activists continued to express their displeasure about their release. The quartet is currently placed under administrative leave.