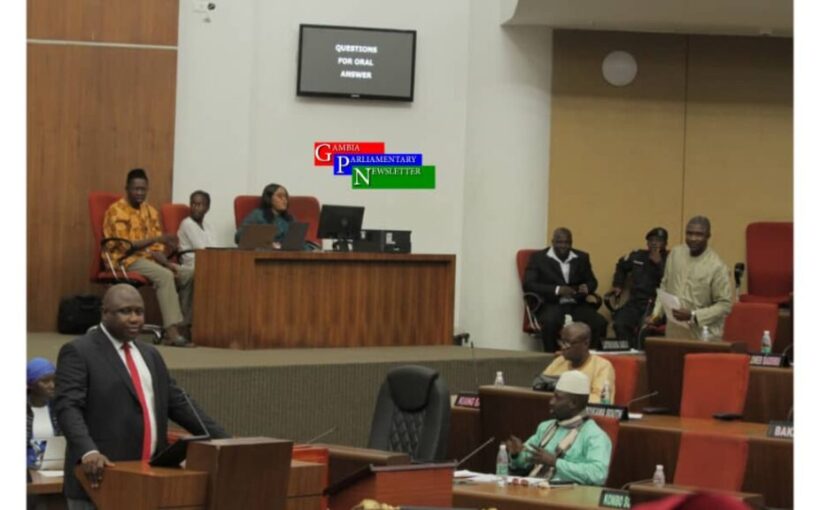 The Minister of Justice Hon Dawda Jallow responded to a Parliamentary question on the steps taken by the Government to implement some of the recommendations of the Truth Reconciliation and Reparations Commission (TRRC). The TRRC was enacted by the Fifth Legislature and concluded its work in 2021. After the Commission submitted its Report to the Government, it accepted most of the recommendations in its White Paper published in May 2022.

During the National Assembly’s questions and answer session held on 30th November 2022, Hon Yahya Menteng Sanyang of Latrikunda Sabiji asked Justice Minister Jallow to explain “what caused the delay in the implementation of the TRRC’s recommendations for legal, political and institutional reform. Those recommendations that could be taken without any cost implication?”

Justice Minister Jallow pushed back in his lengthy response, saying: “there has been no delay in the implementation of the TRRC recommendations on legal, political and institutional reforms, particularly those that do not have cost implications”. He explained some of the measures put into place such as the National Security Strategy and the Security Sector Reforms Strategy amongst others.

After some deliberations, he highlighted “significant reforms of the Security Agencies like the former National Intelligence Agency (NIA), the removal of powers of Arrest by the SIS” and “human rights training for the Police Force as well as the removal of the Drug Law Enforcement Agency from under the office of the President to the Ministry of Interior”.

Hon Sanyang who won his first seat in Parliament via the United Democratic Party made follow-up questions on the name change of the NIA to SIS. He asked Minister Jallow to clarify if he included “changing the name NIA to SIS” as “institutional reforms?”.

In response Minister Jallow explained that “what I said is that their mandate, the NIA as they used to be known, used to arrest, detain people and interrogate people. That has been removed from their mandate, they are no longer arresting and detaining anybody. That’s a key reform of the mandate of the NIA that am saying should be recognised”.

It must be noted that the reform of the NIA’s mandate took place before the submission of the TRRC Report and Recommendations.

Hon Sanyang continued to ask more questions referring to recommendations that he believed had no cost implications towards their implementation. Although the Hon member for Sabach Sanjal raised a Point of Order to stop him from asking his question, Hon Sanyang proceeded with his second supplementary question, asking the Justice Minister about “a recommendation by the TRRC that the President should stop patronizing religious bodies”. In his view there is “no cost implication by way of writing a letter to the Institutions that the President is no more patronizing any religious body. Whether this has happened?” he asked.

On this occasion Justice Minister Jallow didn’t have a response: “I do not carry all the TRRC Recommendations in my head. So, I would have preferred if you have asked a direct question on that issue. I would have been able to answer it. I would not be able to answer you [off the] top of my head regarding a specific recommendation that you’re asking,” he said.

Minister Jallow was allowed to continue his deliberations before the supplementary questions from Hon Sanyang. During his lengthy response, the Minister deliberated on the progress of legislative reforms and other reform measures which he says have progressed the implementation of the TRRC Recommendations.

Minister Jallow recalled that some Bills “have already been tabled with this August assembly” including “the Prevention of Torture Bill, the Anti-Corruption Bill, the Election Bill, the Criminal Offense Bill and Criminal Procedure Bill” which are yet to be passed by the Sixth Legislature.

It can be recalled that Minister Jallow failed to appear for a scheduled sitting in Parliament and was admonished by the National Assembly who removed his Bills from Parliament’s Agenda. However, the Speaker of the Sixth Legislature, Hon Fabakary Tombong Jatta ruled that Bills of the Fifth Legislature may be reintroduced in Parliament and continue from their previous stage.

Justice Minister Jallow added that some Bills are currently being drafted, while some Bills have been completed by President Barrow’s Cabinet. Minister Jallow noted that the Bills which could be introduced in Parliament soon include “the Evidence Bill, the Victims Bill, the Vetting Bill, the National Security Bill” amongst others.

Minister Jallow continued his deliberation by listing out more measures that progress the implementation of the TRRC Recommendations. This includes the “initiation of proceedings with the ECOWAS to set up an International Court for the prosecution of crimes emanating from the TRRC Report have also started”.

“Training of Security Services and Stakeholders on Forensics in view of the search and exhumation of disappeared persons is going on,” said Justice Minister Jallow. In addition to this “National Consultation with victim-led organisations on the development of a framework for the making of Reparations and drafting of Victim’s Reparations Bill is advanced”.

Most importantly “the Development of a prosecution strategy to guide prosecution of TRRC Crimes is completed,” highlighted Minister Jallow.

He concluded by explaining: “almost all activities have cost implications but some [are] more costly than others”. Justice Minister Jallow added that his Ministry has “carried out a low-hanging fruit assessment that has identified 30 less costly activities for implementation pending the finalisation of adequate resources for full implementation”.