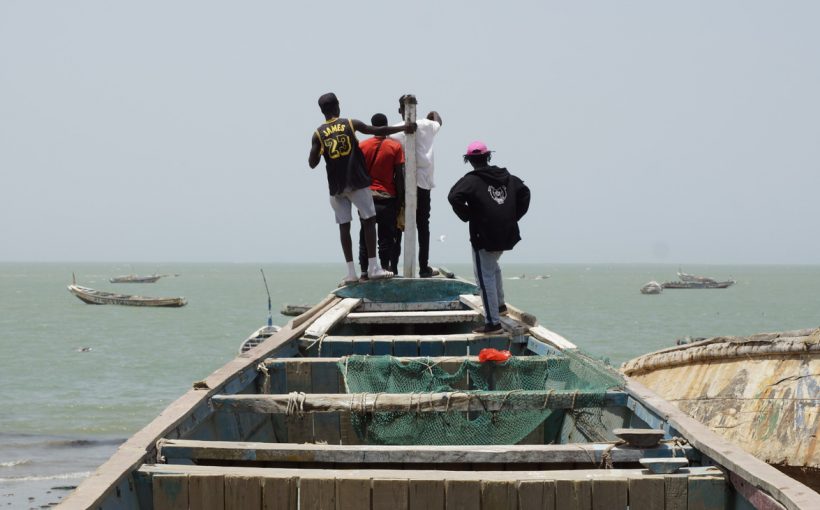 In every story there is always another side to it, in this research piece by journalists Alex Rietman, a Dutch investigative reporter and Fabakary B. Ceesay, Gambian investigative journalist funded by Money trail and journalism fund.eu, conducted a research from the seashores of Gambia and Senegal where emigrant boats frequently leave for the Canary Islands.

Mbour was a booming fishing town and known for producing good fishermen and sea Captains, until 2006 when it was hit by a massive exodus of skillful youth to Spain via Canary Island. Most of their best fishermen and excellent captains left for Europe in search of work to better their lives and families back home.

However, the massive migration of Senegalese youth is attributed to the scrambling of foreign fishing companies operating in their waters. They have no alternative but to migrate to Europe in search of work.

Though, the dangerous factors of this trip would not scare the youth from taking the journey, “we either died or made it to Europe rather than to live like a destitute in our country”.

There on the seashore known as “tefess”, are parked hundreds of abandoned, un-used or unfinished boats but also new ones waiting to be deployed.   Few new boats are part of a government project meant for rapid entrepreneurship of women and youth. But the angry fishermen would not recognise that project. “All we want is our sea or we will all head to Europe”, said a group of young fishermen.

Abdou Jahateh 37 says “they bring us boats, but our sea is empty, these boats will not be used because there is no fish in the sea. The Senegalese government has sold the sea to foreign companies. Now we have no choice but to use our sea knowledge and navigate to Europe”.

Modou Dione is 57, a leader and local teacher, surrounded by disciples said they are fed up with competing with foreign fishing trawlers in their waters. “Since we cannot compete with them in fishing then we will leave Senegal for Spain to look for work to feed our families home”.

“All the billions of Euros Europeans are spending on equipping the Senegalese security forces against us should be directed to us to stop the irregular migration. With all their equipment they cannot stop us because we know the sea more than them”, said Dione.

About whom the traffickers could be, Dione said “We are the organisers, we engage our families, friends and urge our young ones to take the journey before they starve here. We are proud of those taking the journey and helping their families back home. They are heroes within our society”.

Mr. Mountanga Kane is an experienced journalist with knowledge in migration reporting estimates that proceeds earn from organising one trip depending on the size of the boat is between 40,000 to 80,000 Euros. According to Kane, after deduction of expenses on boat, food, water, fuel, engines, communication, GPRS and navigation system the profit can be up to 20,000 to 40,000 Euros.

Though the profit is shared among the organisers and helpers, more than ten people can be involved in the process. Finally, nothing more than 3000 Euros per person for a trip that can cost them several years in prison if caught, Kane said.

The Chief de “tefess”, Pierre (Pa) Alioune Badou Ndoye 82, a respected retired fisherman and community leader is very aware of the clandestine migration involving his own family. “There are truthful and honest organisers and captains but there are scammers too. They will take your money and disappear in thin air. But such cases are done by persons who are not members of the community”. The 82 year old was a champ in the 70s, he won an award and trophy for boat racing and sailing. Usually the fishermen or agents within their community keep their word and do their best to arrange trips, unless intercepted by authorities.

Ms. Khady Ndoye 40, is a newspaper Court reporter covered trials involving the state and emigrant traffickers. “The organisers are people from the local community, from a legal point of view they are criminals, but not in the society, says Ms. Ndoye.

Senegalese Northern town of Saint Louis border with Mauritania is a old French West African colonial city locally call Ndar, known for producing finest and bravest fishermen and sailors across Senegal, is the home of the famous Guith Ndar, 1300 kilometres and nine days sail to the coast of Canary Islands. This part of the Atlantic sea is the roughest of all along the Senegambian Coast.

Hence only bravest men can sail in big canoes known as “Chez Ndar” is locally made. Here lives several families of five generations of descendants of fishermen.

Here sits five young ambitious skillful youth who are yearning to go to Europe, a qualified carpenter, a tailor, auto mechanic, furniture seat designer and a tailoring apprentice, but unemployed and with no skill centres or avenues to utilise their trade to make a living.

“I will prefer to stay here with my family and loved ones”, said Aliou Diame, a qualified mechanic but no workshop and tools. “There is no reason for me to leave if I can make a better living here. But if I get the chance to board a boat to the Canary Islands I will risk it.”

Last year there was a shipwreck along the Senegalese Coast in which hundreds of migrants died, but Aliou still wanted to risk his life. Though nowadays, Senegalese Police and their Spanish counterparts constantly patrol the coast makes the deal more and more secret than ever. With all that if you really want to travel, you will always find someone with a boat planning to go.

Aliou said he knew many local people who are his personal friends and are willing to go to Europe. Though he thinks of the loneliness and sadness of leaving a family behind without knowing to see them again, the hope of arriving safe and sending them money put him at ease.

Kalilu Cham 33 is a colleague of Aliou married with two wives and 3 children, and is a qualified car mechanic. “My intention is to stay here if means of sustainability is available, but now I am looking for any opportunity that comes my way to go to Europe”, says Kalilu. On the intensity of the police patrol, he said, “the police are doing their work and we are also on our plans but it was then easier than now due to many security informants within the society.

Secretary General of (“Union Regional Pecheurs”), an Association of Senegalese Fishermen also operating an office in Mauritania, Mr. Mustapha Dieng, gave a brief history of the city before, during and after French colonial domination. “Our people don’t even embrace western education nor travel to their land. It is only recently when our livelihood was sold to foreign fishing companies that our young ones started to leave for a better life in Europe”.

Dieng recalls from 2006 to date when foreign fishing companies started to operate in the Senegalese waters makes life difficult for fishermen causing a massive departure of fishermen and other youth for Europe.

From 2006 to date Senegalese government refused to give them the exact number of foreign fishing companies given license to operate in Senegal. Lots of foreign companies are registered in the name of citizens but that is a ploy. “Our own citizens are being used like toys to serve as fronts for foreign companies to loot and destroy our source of income,” says Dieng.

With a membership of about 20 000 persons, “we have a voice and if the government doesn’t consider us in the migration matters, all their efforts will not yield any fruits”, Dieng posited.

Pap Failey is the president of the Mauritanian branch and echoes the same sentiments. “We can stop this clandestine migration only if the government is open to us. Last year we wrote a letter demanding to protest and show our grievances to the president our permit application was denied”, Failey said.

They were later given permission to protest in St Louis where thousands of fishermen showed their anger and frustration.

Lack of fish had caused lots of fishermen to abandon their profession for a life in Europe due to frustration of no chance of making a better living for their families.

According to both Dieng and Failey their association is deeply rooted in Senegal and Mauritania with a good membership in the Gambia, can curb and within a few years eradicate the clandestine journey to Europe.

“Is our members who are trafficking out of frustration. Organisers of trips can come from Gambia, Cassamance and other parts of Senegal to look for brave captains and crew here or at Mbour. These captains and crews are families and members of our association. We know each other”, the two said.