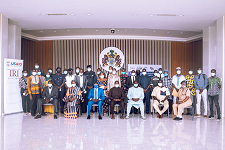 The Ministry of Interior in partnership with the Association of Non-Governmental Organisations (TANGO) and the International Republican Institute (IRI) on Thursday, 23rd of September 2021 organised a day’s interface among political parties, CSOs, Independent Electoral Commission (IEC) and the security forces. The initiative was meant to enhance mutual understanding and improve relationships and collaboration amongst the stakeholders for a peaceful electoral process.

In his welcome remarks, the Chairperson of TANGO, Mr. John Charles Njie stated: “facilitating this dialogue reinforces what I have always believed as a civil society organization leader; that we shall engage with government and work in partnership with them, since we don’t always have to be at loggerheads. There are times that we could seat around the table and do what is best for our country’’.

He expressed optimism that Gambians would have a peaceful election through such stakeholder engagements and collaborative efforts.“If we sit as Gambians and ask we want for our country, I am sure at the end of the dialogue, we shall all leave with a common understanding and indeed The Gambia will be the Smiling Coast once again”. He thanked the Minister of Interior, the Permanent Secretary and the entire team of the Ministry for coming up with such “a timely event in advance to the elections”.

The co-Chairperson of the Inter party Committee (IPC), Mr. Amul Nyassi, welcomed the initiative and reminded that the IPC was formed in 2005 by parties that officially came together to sign a Memorandum of Understanding. Since then, he said, this has been promoting and safeguarding their conduct for consensus building among members of the IPC Committee. He explained that even though the 18 officially registered political parties constituted 18 different opinions and 18 different approaches to national development; there has never been a time when the committee resorted to any voting conflict; that no matter how   difficult the session might become they disagree to agree.

Mr. Nyassi underscored the significance of political parties coming under one umbrella with civil society organisations and other potential players to discuss maintenance of peace in the electoral process. “However,” he argued, the primary responsibility of coordination lies on all of them. “It all depends on how we engage, how we dialogue and how we want to nurture the peace and stability that we are yearning to continue enjoying,”he added.

The Minister of Interior, Yankuba JN Sonko, said his Ministry found it significant to bring all the stakeholders together to discuss election security and to come up with a strategy that would be all-inclusive, transparent and fair, considering the past experience of security forces, political parties and the public.

He contended that a peaceful electoral process requires collective efforts and to improve the quality of engagements among stakeholders and security operations before, during and after elections. He therefore assured of the Ministry’s will to ensure that adequate security is provided during and immediately after nomination; at polling stations, counting centres, political party headquarters, as well as all political rallies or campaigns,  personal protection and escort services to party leaders and other security needs.

Dam Touray, a participant representing the National Reconciliation Party, said politicians have a key role to play in the maintenance of peace in the country especially during elections. He added that politicians should be cautious of the messages they deliver and share with their followers during campaign periods.

Karafa Sambou, a representative from the People’s Progressive Party, said one of roles of the political parties in the maintenance of peace is to obey the IEC codes of conduct and advocate for peace throughout the electoral process.

Both participants are optimistic that if the action points discussed and shared during the dialogue are implemented, The Gambia will undergo peaceful free and fair national elections.

The meeting was concluded with a brief presentation by the Deputy Commissioner of Police Intervention Unit, Mr. Lamin L.K Bojang, on security preparedness by the Ministry of Interior, while the Information and Public Affairs Officer of the Independent Electoral Commission, Ahmad Taal, deliberated on IEC’s plans in the upcoming elections, detailing the different regulations and guidelines of the electoral procedures.