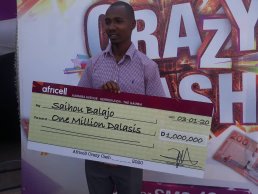 Mr. Saihou Balajo, a newly marriage man is the lucky winner of the Millionaire lottery project initiated by Africell, one of the biggest GSM providers in the country.

On Thursday 2nd January 2020, Africel unveiled their latest millionaire lottery as well as awarded cash prices to three other winners in their ongoing ‘crazy money raffle’.

Africell Communication Officer Mr. Musa Sise, revealed that Africell have been a life changing institution since its establishment in the Gambia in 2001 similarly impacting change into the lives and livelihoods of numerous people. Adding that the initiative is part of their corporate social responsibilities to give back to the Gambian people.

Africell, who was awarded by the Gambia Chamber of Commerce as the best telecommunication provider have over the years changed the lives of many Gambians into millionaires and other fortunes most especially in their crazy money raffle initiative.

The crazy money is played weekly on Gambia Radio and Television Services where ten lucky winners are announced to win numerous cash prizes.

Unveiling the lucky winner, Mr. Saihou  Balajo received the good news of the year on the day of his weeding whiles on the way home with his bride from the marriage ceremony.

Mr. Balajo expressed delight to be crowned as Africell’s Millionaire stating that the money will not only change his life but will as well change the lives of others as he is into youth work thus volunteering for an organization that helps to uplift the lives of underprivileged people .

When asked as to how he intends to spend the money, Mr. Balajo promised to invest the money into business to creating work opportunities for the young people in the country to curb the high rate of youth unemployment.

Mr. Ebrima Barry Director of Administration presented the prices to the winners.