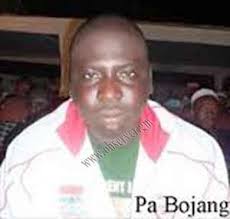 Credible information gathered by Trumpet Newspaper has it that, Pa Ousman Bojang, the onetime powerful cousin of former President Yahya Jammeh had in late April 2009, clashed with then Crime Management Coordinator (CMC), Mr. Burama Dibba at the Police Headquarters in Banjul.

The confrontation between the two happened when Pa Bojang walked into the office of CMC Dibba and offered him a position of Inspector General of Police (IGP), at the time when Mr. Benedict Jammeh (late) was still occupying the apex post of the Gambia Police Force (GPF).

Dibba, a seasoned Police Officer, was said to have turned down the offer, outright, and almost spat on the face of Pa Bojang.

According to our sources, Pa Bojang was assigned by Yahya Jammeh to scout a potential replacement of Benedict Jammeh who was out of the jurisdiction at the time, on an official mission in Taiwan.

Sources who were present at the Police Headquarters, vouched that they heard loud voices of ‘push and pull’ between the duo over the issue, and Dibba, who lost his rage, almost smashed Pa Bojang’s face with a punch calling him a “hypocrite”.

“Who do you think you are offering me an IGP position? To hell with you.”  If you think I will betray Ben, then you a big fool. Get out of my office before I smashed your face”, furious Dibba was heard shouting at Pa Bojang.

The latter, according to witnesses, relented and subdued, but he told Dibba that he would pay for his actions towards him (Pa Bojang).

As gathered by this medium, Dibba, in turn, verbally insulted Bojang’s mother and boldly told him he Dibba   is ready and prepared to face anything as far his profession is concerned; but he would never betray his friend-Benedict Jammeh.

Speaking to this reporter from his Stockholm home in Sweden, Dibba confirmed his confrontation with Pa Bojang and averred that Pa Bojang was out to mix him with his best friend, Benedict Jammeh.

Dibba indicated that Bojang was playing hypocrisy between security officers so he could easily manipulate and put them under his control.

“I am not that type of man who can be easily handpicked and used against a fellow officer, and more so, against such a competent IGP like Benedict Jammeh. He confirmed that Pa Bojang attempted to threaten him but he never felt intimidated.

“He told me I will pay for my actions towards him”, the former senior GPF officer recalled.

Eventually on 30th April 2009, CMC Dibba and then head of Serious Crime, Superintendent Ebrima Kunchi Jammeh who was also very close to Benedict Jammeh were arrested and taken to Mile II Central Prison. They were arrested by State Guard soldier Sergeant Wuyeh Sanneh and Victor Demba from the National Intelligence Agency (NIA). Supt. Jammeh was also approached by Pa Bojang on the same day, but he humbly declined the offer, according to our informants.

Superintendent Jammeh, now retired, confirmed the incident and said he was surprised by such an offer from a civilian. Though he knew Pa Bojang as a close relative of Yahya Jammeh, but he maintained that Bojang has no mandate to handpick an IGP of his choice based on hypocrisy.  Kunchi said he declined the offer based on ‘truth and honesty’ as at the time he was not the right officer for that portfolio.

According to Dibba, while they were being processed at the Mile II Prison, Sergeant Sanneh told him, ‘Never turned down an offer from the H.E. again’.

The duo was detained for three months without charge until on 30th July when they were released. Dibba was later charged with giving false information but was eventually acquitted and discharged by a Banjul Magistrates’ Court after the testimony of Benedict Jammeh.

Both Dibba and Jammeh were subsequently dismissed from the Police without any reasons given.

Several attempts were made to get in touch with Pa Bojang, but he could not be reached for comments.