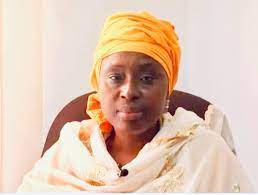 Eye Witness information gathered by Trumpet Newspaper has it that two persons were injured when two electricity meters at the GACH Fatou Golden Plaza Building housing the Ministry of Children, Gender and Social Welfare caught fire and burnt to ashes causing pandemonium and rendering the entire Ministry handicapped.

The said two incidents happened on Tuesday 7th and Friday 10th June 2022, respectively, during working hours when the two meters caught fire. The staffs of the Ministry were seen running helter shelter for their lives. The said building according to sources does not have an emergency exit doors for incidents like such causing scrambling at the only entry and exit door.

The first meter that caught fire was the one supplying power to the Department of the Children affairs and on Friday the Minister’s own office meter also caught fire at the time Minister Fatou Kinteh Sanyang was arriving at work. It was also said that both the Permanent Secretary and Deputy Permanent Secretary were arriving at work when they found their staff outside in a panic mood.

One of sources said, “Since last week there is no work taking place at the Ministry, all we do is sit and idle in and out of the office without electricity to do our work. We are all frustrated and scare to even enter the building because is not safe if another meter will caught fire. We are lucky that our offices are located at the first floor, if it is at the third floor many people would have been injure or there might be loses of life”.

The GACH building along the Bertil Harding Highway call Fatou Golden Plaza is owned by Abubakary Jawara a Gambia businessman, also houses the GACH global trading company at the third floor whiles the Ministry of Children, Gender and Social Welfare is located at the first floor of the building.