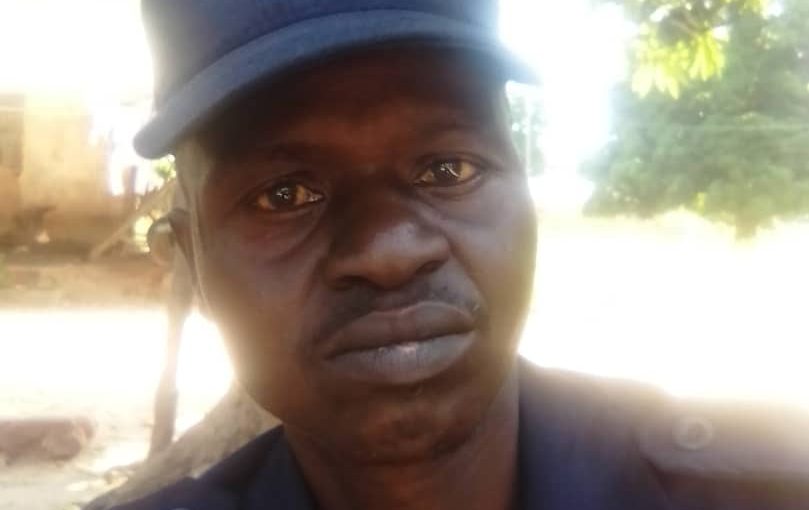 Trumpet newspaper has been trailing the Police Intervention Officer (PIU) that vowed and swore to kill the leader of the United Democratic Party leader and his supporters or jailed them for life has been identified as Mr. Samba Bah. A recent graduate of the last intake of the Gambia Police Force was born to un-documented migrants, but grew up in Kiang Kaiaf.

His parents Mr. Sarra and Ms. Sierra Bah hailed from Guinea and settled in Kaiaf in the late 1980s. His Father is known within the community as “Sarra Bouye” and Mother as “Sierra Fulo”, enjoyed a favourable relationship with Villagers of Kaiaf until their demise.

Samba later joined his parents in the Gambia at a tender age and was enrolled at Kaiaf Primary School but dropped out at grade six.

The young Samba later ran away to Kafunting in Cassamance where he was engaged in a motor bike taxi commonly known as ‘Jakarta”. He only resurfaced back in Kaiaf after his parents passed away.

After his return from Cassamance, he continued his father’s local bakery business and developed a friendship with PIU officers stationed at kaiaf check point.

There he became a ‘boy boy’ to one sergeant (name withheld) and was supplying bread to the officers for free.

Later that particular sergeant was promoted and moved to PIU Headquarters at Kanifing, helped Samba to work as a baker and bread supplier for officers at the PIU Headquarters.

During the last Police recruitment, Samba joined the force but shortly before his enlistment into the force, Samba went to Kaiaf to get an attestation of birth from the Village Alkalo. His request was turned down due to the fact that he was not born in Kaiaf.

He angrily left and came back a week later bragging about getting an attestation from the Alkalo of Kwinella Fula Kunda, a Village he never lived in.

According to the Gambia Police officer announcement of the 2021-2022 recruitment, all interested persons must be citizens of Gambia. The minimum requirement for application is a minimum of four credits in the West African Senior Secondary School Certificate Examination (WASSCE) with a compulsory credit in English.

The screening of the applicants was done by a committee set up by the Gambia Police Force. The committee is tasked to ensure that all the set guidelines laid down in the advertisement are met by applicants in order to ensure fairness and equity to all applicants.

Any applicants who do not conform to the recruitment guidelines would be disqualified and would not be invited to take part in the final training process.

The Police selection committee also conducts examinations on academics of the applicants to ensure the recruitment of highly-quality personalities, prospective candidates who pass the screening process would be invited to take part in an examination to determine their level of academic capabilities.