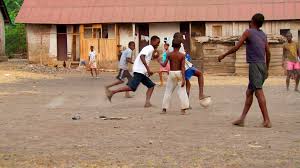 Despite the fact that thousands of children are let loose and used as crowd fillers and chasers of President Adama Barrow’s entourage on his political backup tour across the country, members of the Gambia Police Force operating within North Bank Region are busy going after innocent poor villagers and their children for merely playing football at their backyard.

In the urban areas, children are not harassed for gathering at street corners, playing football all day, petty trading and apprenticeship for commercial vehicles.

In the North Bank Region, farmers’ children between the ages of seven and fourteen are frequently ambushed and chased off their local football field by Police. Several times children ran away and left behind their shoes only for the Police to seize them.

According to an eye witness account, on 30th September, a troop of Police Intervention Unit coming from the direction of Farafenni descended on the Village of Dobo, Central Badibou, North Bank Region, chased children playing football at their backyard, seized their shoes locally call ‘slippers and charah’, parked them in their vehicle and drove off towards Kerewan, the regional Capital.

The witness said the Police seized about a dozen shoes on that evening.

Another eye witness informed the Trumpet Newspaper that a week ago at the same Village, Police chased travelers who were waiting for transport at the Village bus stop (‘crosma’). The witness said a man was praying on the roadside was chased and caught by Police for not wearing nose and mouth mask.

Though, according to the witness, the person had a mask but place it on his side whiles performing prayers. Nevertheless, the Police chased him in the middle of his prayers, caught and forced to pay D400 with the mediation of loved ones, who paid the bribe for his freedom.

According to the aggrieved families, since COVID-19 rules were imposed, most villagers within the surrounding encountered harassment from the hands of the Police and those caught were intimidate to pay a money or risk detention.

Reports of farmers been harassed by Police for not wearing mask whiles working on their farms was all over social media.

One parent lament, “few days ago I bought a ‘charah’ D100 for my son only to be seized by the Police for merely playing football at our backyard”.

When contacted Police Spokesperson Superintendent Lamin Njie could not confirm the exact incident from the side of the Police, but said officers that patrol that areas including Dobo Village are officers from the COVID-19 Security Task Force on routine patrols to enforce the Public Health Infectious Disease protection Regulation, which includes non-essential public places like football fields.

Superintendent Njie added that Kerewan Police confirmed to him that they were not on patrol on that day.