The United States government fully supports the Government of The Republic of The Gambia’s investigation into the corruption of former President Yahya Jammeh, and Gambian efforts to recover the ill-gotten gains of Jammeh and his associates.  We commend the efforts of the Commission of Inquiry into the Financial Activities of Public Bodies, Enterprises and Offices, and those of the Ministry of Justice and Office of the Attorney General of The Gambia for their work in uncovering and documenting the kleptocratic actions and mechanisms of the former president and his associates.

We echo President Barrow’s position that “never again” must be the focus of Gambian effort, not only in regards to the abuse of power that led to systematic, state-sanctioned gross violations of human rights, but also in the pervasive corruption that robbed the people of The Gambia and depleted the resources of this country to the benefit of only a very few.   We encourage the government to work closely and expeditiously with the National Assembly to analyze this extensive corruption, and develop strong legislation, strong regulations, and strong rule of law-based investigative and prosecutorial mechanisms to address persons who abuse their positions of public trust to greedily benefit themselves – not only in the past, but also in the present and the future.

Though it will be a long and involved process, the government of the United States is committed to working with the Government of The Gambia to pursue all available legal means to recover the ill-gotten gains of Yahya Jammeh and his associates identified by the Commission of Inquiry.  We encourage other governments and international organizations to render all possible assistance to the Government of The Gambia in this regard. 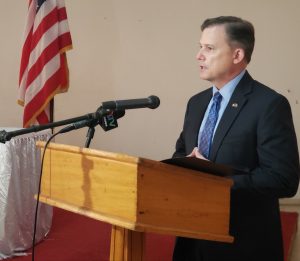 Background information on U.S. Government efforts to combat the corruption of former Gambian president Jammeh and his associates: