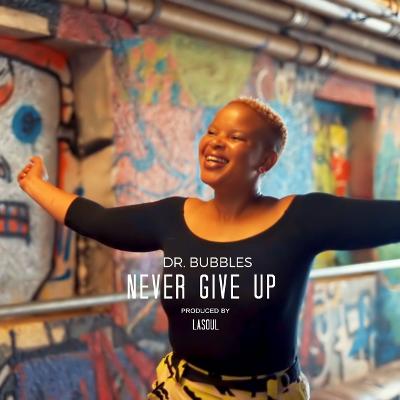 Ms. Babalwa Nosebenzile Ludlolo, 33, is a South African Afropop Singer, Voice-over-artist, actress and independent businesswoman all the way from a very small township called Mount Frere in the Eastern cape, but currently residing at Delft in Cape Town. Her popular single Music video produced by LASOUL STUDIO and released in 2020, called: “Dr. Bubbles-Never Give Up”, is currently being shared by many of her fans and well-wishers from around the globe.

The Music Video is said to be “real events between Dr. Bubbles and a homeless young man” called Bongani. The song, as she indicated, “is a constant encouragement to anyone having a hard time to Never Give Up!”

She had been a volunteer at Nyanga SAPS Victim Empowerment Room, since 2011 until 2019. “My aim in 2020 is to take my experience gained in helping everyone everywhere, not just Nyanga,” she intimated.

Popularly known by her Stage name, “Dr. Bubbles”, the female artist in an online interview with this reporter, disclosed: “For 9 years of volunteering in saving people’s lives as a counsellor at Nyanga SAPS victim support  room, I  got motivated by people I met there and decided that you know what ‘let me just write a song to motivate people to never give up in life’, and that was the only way I could counsel people by giving them a song.

How long have been singing? she was asked.

Dr. Bubbles replied:”I have been in music industry for two years and I only released a song called Never give up. I wrote this song to encourage and give hope to those who have already given up in life, those who don’t want to try anymore. There’s a part that asks a question which says “UNCAMA KANJANI USAPHILA?” which means, how do you lose hope while you [are] still alive? From that part, I want people to know that there’s a reason behind every situation they come across in life and they must stay strong and never give up, life is too short.” The female Afropop singer further posited that, “People need to let go of what happened and move forward with their lives; they need to always try in life and if they fail, then they must try another ideas until they get what they want in life”.

In few years to come, where do you expect to see yourself, in terms of music?

This is what Dr. Bubbles had to say: In few years I want to be one of the top writers in music industry because my aim is to write fruitful, healing, and hope-giving songs.

“For young generation, I made sure that even though I want to pass the message to my people I should also consider them, so I made a touch up of house so that they can also benefit, not to dance for my song but to also listen to what the song utters.”

The South African female Singer’s message to her esteemed fans is that, “no matter what life gives you, either struggles or achievements you must not forget where you come from and hang in there and keep on pushing.

“Supporting each other is very important because it encourages others to keep on pushing in life.”