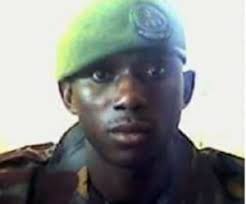 Reliable information gathered by Trumpet Newspaper concerning Soldier Omar Sarjo has it that he was a ranger posted at former President Yahya Jammeh’s ranch at Kanilai. Omar Sarjo and 8 other soldiers were guarding Jammeh’s ranch whiles serving as soldiers of the Gambia Armed Forces.

Enlisted into the army in July of 2005,  Sarjo was dismissed in 2017 after serving  for 12 years. He spent most of his duties at the Kanilai Farm as a guard.

The ranch is 286 hectares, within there are boreholes, fish ponds and crocodile pools. There were 688 cattle, 40 sheep, 8 horses, 6 donkeys, 9 hyenas and 4 zebras. There were also hundreds of domesticated pigs imported from Guinea Bissau and wild pigs let loose in the bushes.

The rangers used to kill the pigs for hyenas and crocodiles when there is shortage of food.

The rangers as gathered by this medium were, Karim Sanneh, Malang Saidy, Omar Sarjo, Ousman Jammeh,Alasana Badjie, Burama Saidy, Lamin Jarjue, Samba Jamanka and Yaya Jammeh. All of them soldiers.

The 688 cattle were divided into 5 herds with 11 shepherds herding them.